My writing partner has given the word "hook," as our writing challenge, with personal memory. This will, indeed, be a challenge for me, because it's a word that doesn't spark any enthusiasm. I didn't immediately say, "Great, I have a few ideas." In fact, for me the word is off-putting. I dislike the sound of it; it's bluntness, and it's nasty image of fish hook or meat hook.

That being in said, I must write a post using the word, "hook."

OK, on the positive, I am reminded of the crochet hook. I was just going through my mother's (and grandmother's) cache of crochet hooks. They are both infinitely small and grotesquely large. My mother, near the end, hoarded them. She bought any she found in thrift stores and added them to her collection. I have about 100 more or less. My grandmother would have used the small ones, in fact, the very small ones. She often sat in the living room after dinner and crocheted fine lace edgings for linen hankies, while listening to Guy Lombardo on the radio or my grandfather playing his harmonica. 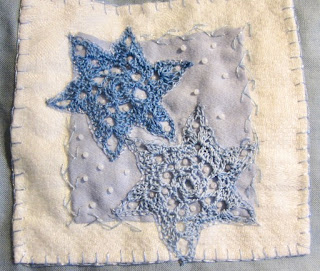 She would sip half a glass of beer and invite her budgie, Fritz, to have a taste. I would sit beside her and watch her hands move quickly and gracefully through the double and triple crochets, turning pristine white cotton thread into delicate lace patterns with the smallest, shiniest steel crochet hook. To a six-year-old, this was tranquility personified.

Last week, I needed some of that tranquility. I trekked over to St. Claire and Dundas where the cultural mix is Portuguese/Italian. Years ago I had visited a store there that stocked both fabric and yarn. I knew they would have the very fine white cotton for crochet. Things had changed, though, so I had to hunt around for what I needed. I eventually bought some #8 thread. I was actually looking for #12 and passed on the #20, which I may buy later for another project. (As a note - the higher the number the finer the thread.) I needed the yarn for two crocheted snowflakes to add to my daughter's quilt. She had a Brownie (now called Embers) badge with two snowflakes embroidered in brown and orange. Unfortunately, she will have to accept snowflakes crocheted in white and blue for her quilt. Winter is depressing enough without snowflakes in brown and orange. However, I did achieve that necessary tranquility with an outing, a project and the exercise of using one of those very fine crochet hooks.

The other hook is from the title of the post - hook, line & sinker. I have had a fascination with fishing most of my life. When I was younger - ten or twelve, I would drag my family out to some pond to try my luck with pole, reel, hook, line & sinker. I don't particularly like lake fish, but I love the idea of taking from the wild - OK the ponds are stocked - and providing food, free. 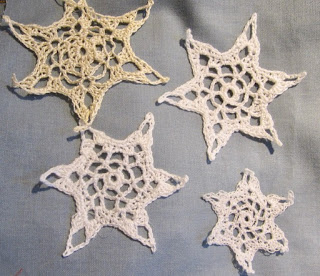 However, I don't understand, catch and release. Why would you spend hours, days, even weeks fishing just to throw the catch back into the water? Really, get another hobby. Now I can understand the allure of all those fancy fish hooks, the fascination with the precision of the reel and its locking mechanism, and the many other intricate trappings of the sport. I can also understand being out in nature, alone or with a few other like minded people. I can even understand the challenge of wanting to hook something. And, yes, I can sympathize with the caught fish, who would rather be returned to its habitat, than eaten. But to spend a lifetime searching for something only to throw it away, after you have found it, is beyond me.

On the other hand, fishing is a more humane activity than hunting, which I despise. That being said I was once friendly with a knitter who managed a knitting shop and gun boutique. In fact she would knit you a sweater and make a button out of the bullet from your kill to add to your sweater. Her company was called "The Knitting Nimrod." Yes, it is a crazy world.

The pictures? My fascination with hook, thread and needlework.

Have a rewarding day!