What you don't need in your time of need....

"When troubles come, they don't come as single spies, they come as in battalions."

So yes, when my husband died, I had to deal with a myriad of tasks in a very short space of time. I had to -

1. Contact a funeral service to deal with his remains and carry out a cremation.

2. I had to write an obituary on a Tuesday and send it to the paper for a Saturday publication.

4. I had to support those in need.

So into this mix was added -

1. An inflated invoice from the funeral home. I was quoted $4,000.00 for the initial services. When I went to retrieve the ashes. The bill was $4,800.00. I refused to pay until they could explain the discrepancy. They wouldn't. I eventually found a government "watchdog" for the funeral industry. I contacted them. They were a little vague. But the next day the funeral home called and said there had been a mistake and I was only to be charged the original quote of $4,000.00.

I didn't need this extra hassle.

2. My son flew out to be with us before his father died. He booked a return flight on Flair Airlines. It was expensive - $800.00 return from Calgary - because it was short notice. When it was time for my son to return, I drove him to the airport. It was Covid, so you just dropped off. I came home. My son called. "Come and get me. They won't let me board the flight." Although he had the two pieces of government issued identification that was required, he didn't have a passport. (Remember, they flew him to Toronto.) Flair refused to let him board and the attendant rolled her eyes when he said he was here for his father's funeral - NEVER FLY with FLAIR.

I returned to the airport. Picked him up and we booked a flight on Westjet two days later. Again, I didn't need this extra grief.

Most of the other settlements went fairly smoothly. My husband had had his affairs in order. 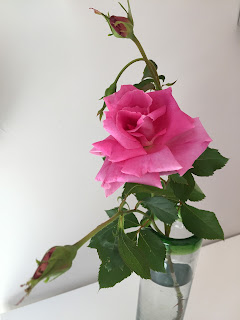 3. However, I didn't need the furnace to stop working 3 days before Christmas and for all the usual companies I called to be unavailable until January. I used a new company. They told me I needed a new furnace - mine was too old and they didn't have the parts. I said fine. I'll pay you for the service call and you can leave. They hesitated. Well, maybe if they called the office they might have the part. Of course they had the part, but it still cost $800.00 to fix the furnace.

I'll spare you the "wish this hadn't happened," complications, such as, a few car problems, son working Christmas eve, when I would have liked him home, odds and ends of extraneous costs, duties, WTF government requirements. Really when do you have time to cry!

By March, I think that my war with that pesky enemy, fate, was coming to a close. I had battalions of my own to counter the ones it had sent. I had the support of a strong extended family, wonderful friends and a personal resolve to make the best of a difficult situation and to remember my husband in the way he would have wanted - quietly without a lot of fuss...... I only raised my voice once.

The picture - some things never die - Peace, Truth and Beauty, come to mind. There are others, I know. They may hide for a while, but suddenly, in one spectacular moment, they appear and take us out of ourselves, reminding us that "the force that through the green fuse drives the flower," also gives us the strength to endure!!