I have always loved Fridays. When I was teaching, it was the end of the week of a commitment to a job that gave you enough money to enjoy a few days off at the end of that week. Friday was the beginning of the weekend - time off to catch up. Yes, there was cleaning and shopping and a host of other commitments to do, but there were still a few hours left to call your own.

OK, these days, although I still work full time, I work irregular hours. Send me an e-mail at 9:00pm on a Saturday night about an order that you need for a class on Thursday morning in Nova Scotia and I will go into my office on Sunday, sort out what is needed. Prepare the order for shipping and send it "super" priority to arrive at your rural route on Wednesday!! I love my job!!

Although my father served with the RCAF, as a radar technician during the second world war, my family never really "celebrated" Remembrance Day. My father hated uniforms, formality, protocol and so we were spared the bitterly cold hour or two it took to stand at a war memorial on Remembrance Day.

Now, here was my daughter, who was adopted from country that was never involved in any of the world wars, asking me to attend a service I have never attended in the past. God works in mysterious ways. Of course, this was something I had to do. If you want the next generation to remember, you have to not only show interest, you have to also show up! 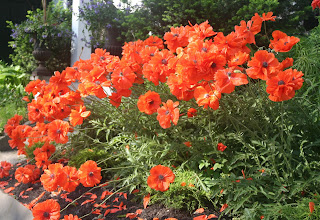 She picked the service at Fort York. We left at 9:30 for a 10:30 start. My son drove. I'll spare you the problems with the GPS. I would have got us there 20 minutes earlier, but the next generation does not read maps nor do they listen to an aging navigator.

Fortunately, there was time to spare, the rain held off and the "poppy" watching was a diversion while we waited for the ceremonies to begin. The service was tasteful, meaningful and fully attended. I am a better person for the effort I made, driven only by my daughter, who attended every Remembrance Day service for the three years she was at university in Halifax, where the entire city turns out!

This Friday was also special in that we were celebrating my daughter's birthday. Yes, a little early, but it was her day off. So after the Remembrance Day service, I rushed to Metro to pick up ingredients for Spring Rolls that my son was making as an appetizer before our order in meal of Thai dishes. Then a quick hop to Jules for some delectable French pastries as dessert.

It was a very special Friday, even though most Friday's are special in themselves for a host of reason's, this one took the cake!!

Have a special day!