My Kingdom for a Mermaid's Purse

I know a little dramatic, but here's how I got there.

I'm in the process of trying to find ways of both appreciating and preserving artwork that I have done, my kids have done, and others, close to us, have done. 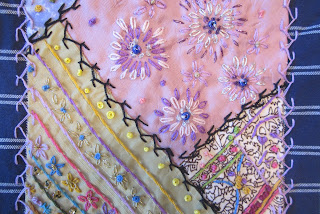 For the artwork in fabric, I have begun doing a series of quilts, as a way of preserving and appreciating some lovely pieces. This is a square from a quilt for a twin bed. Well, of course there will be two quilts, because they are for twin beds and have to be matching. Each quilt has 28 squares of appliquéd and embroidered pieces of needlework that I felt had to be saved. These pieces would be crocheted doilies from my grandmother, a collection of silk and linen handkerchiefs from my mother and a "crazy silk" wall hanging I did years ago and never liked. I know the kids will just throw out the individual items as soon as I'm gone. In fact, they may still throw out the quilts, as well, but the guilt will be greater!

Each square is joined to the next with a strip of fabric which in turn is embroidered. 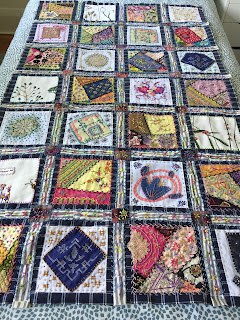 Here is one of the almost finished quilts. I have the other one close to being finished, as well, and I have hand stitched the fabric edging to the first one. I now have to piece together a backing for both quilts, embroider the edgings and secure the backing to the front with some quilting - evening activity for the "stuff" I do during the day.

...but I digress. I was talking about a Mermaid's Purse...we're close.....I don't do much gardening in July - it's either too hot, or I've given up, so I "putter" around adding something here, re-arranging something there...the list goes on. The other day I mounted several pencil sketches I did years ago. Yes, I actually found them in one of the 25 or so half finished sketch books scattered throughout the house. I also found sketches my eldest did when he was young - more ideas for quilts now that I know how to transfer pictures to cloth. 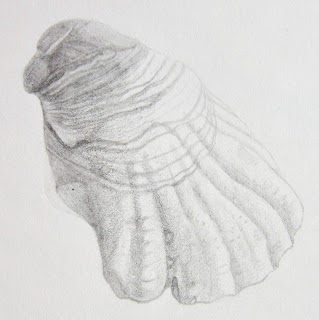 This isn't one of the sketches, but it's close enough. The framed ones are also of shells. This is where I needed help. I had two framed sketches, but needed a third for balance. I decided that I would do a new sketch, but it had to be of shells or similar beach finds. Well, we had kept a few treasures from our various trips to the sea and I was able to locate an almost intact Sand Dollar, a very small and totally intact Star Fish, but I needed a Mermaid's Purse (embryo case for a shark). We used to have about a dozen, but I guess I threw them out over the years. Suddenly, the idea of a beach trip started to materialize.

No, I couldn't justify spending a lot of money to go to the beach to collect a few shark cases. It was at this point that my daughter came home from work and asked how my day was going. I moaned about having thrown out all of our Mermaid's Purses and how I happened to need one right now!

My kids, for all I complain about their messy rooms, their tardiness in doing chores or their flagrant waste of food, time and/or money, are still very magical people. My daughter came downstairs a few minutes later with one almost intact Mermaid's Purse. This only happens in movies or in fairy tales, but it's what makes life precious. 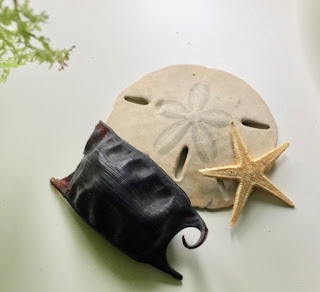 I'm toying with the final arrangement for the sketch. I may show some of the crumbling edge of the Sand Dollar or the other side of the Mermaid's Purse, with its missing "arms" - a composition, perhaps, that comes closer to a statement on life itself. There will always be a missing tendril or two, some crumbling around the edges, beside one or two perfect accomplishments, all preserved in the treasures we decide to keep from the detritus of our lives.

Have a accomplished day!