Everything NOT in its place.....

I'm reorganizing the house. I do it every few years. It clears out the cobwebs and gets rid of the 'junk.' Well, most of it anyway. This time, I am re-doing the basement, as a room for my son, who will then relinquish his room upstairs, which will ultimately become a guest room. 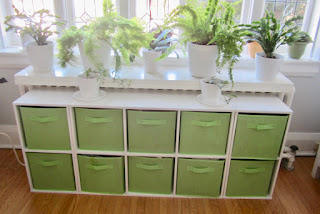 However, in order to do this, I had to first move out all the debris from the basement's previous tenant, my eldest, who's been in Calgary now for 5 years. Fortunately I was able to ship the more memorable of his stuffed animals to him. I threw out the others in my last purge, saying they were too moldy to keep. Did I mention that he'll be 40 this year. There were, though, the other 'keepsakes' - old ninja turtles, scaly rubber dinosaurs, CDs, tapes...TAPES? we don't even own a tape player. 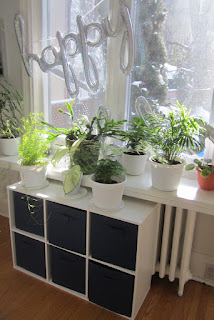 I decided that I could move my yarn, fabric, felting fibre, needlework books, partially finished knitting projects, etc. into the main part of the house, if I could find tasteful storage units. They had to be a certain height - nothing from Ikea worked this time and they had to be a certain length. Well, after several days on Google, I located an organizer with six 12" x 12" cubbies that each held a decorative 11.5" x 11.5" cloth cube for storage at Lowes. I ordered and was shipped the unit with lime green inserts. I built it and loved it. I loved it so much that I wanted another one. Well, Lowes only stocked six sectioned organizers. Unfortunately, another six cubbies would be too long. I needed a unit of four cubbies. In fact two two-unit ones would be even better. They were, however, only available from Amazon. I ordered and was shipped the two pieces. However, Amazon didn't have lime green inserts. I had to go back to Lowes for those. I guess I must have bought the last four in lime green, because when I went back for more there was only hot pink left. Rona, however, had the lime green and some dark blue inserts which I needed for another six-sectioned unit which I ordered from Lowes (again) for the dining room. Whew! that was a challenge.

Now I was thinking of adding another two 2-unit sets to the one in the dining room. I'm still thinking about it.

There is something amazing about being organized.

Have an orderly day