......Yesterday, I made naan, an Indian flatbread that is often eaten with curry. I also made Butter Chicken, but I forgot to take pictures so I'll have to make it again and post the process here, because it was delicious.

I accepted the "naan" challenge, because a friend of my son has just started a YouTube cooking channel - J's World Kitchen -  and I wanted to try some of his recipes. I make curries from time to time, but I often forget to buy naan to go with them. I also forget to buy Mango chutney, but that's another story.

My journey went as follows: (please take a look at J's World Kitchen for the proportions.) 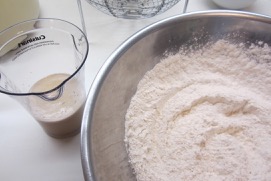 1. I set about to proof the yeast.

2. I measured out the flour and salt in one bowl and mixed the egg and milk in another bowl, while I waited for the yeast to froth up.

The yeast took a while, because it was a little old - not Egyptian tomb old, but you know, old.

3. Finally, I added the frothy yeast to the dough along with the milk and egg and started to mix and knead by hand. Yes you could use an electric dough processor, but that would be another machine on the counter and you would miss all the fun (and exercise) of kneading the dough. J tells you how long to knead the dough. 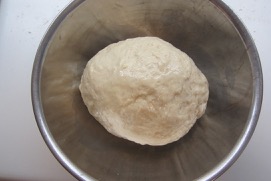 4. I covered my "blob" with plastic wrap, a tea towel and put it in a "warmish" spot to rise. I then went to Metro to pick up a few things.

5. An hour later my efforts were rewarded with an even bigger blob of dough that had risen beautifully!! It was huge, too big to turn it all into to naan, so I halved it and will use the rest for a pizza tomorrow. I love doughs that just need one rise. I do make bread, but I always worry about the second rise. 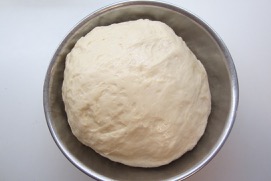 6. Now to fry the naan in a cast iron frying pan. Fortunately, I have four of these, each a different size. It's a heavy collection :) J said to pull off chucks of the dough, roll them out and then fry the flattened dough, coated in butter, in a medium hot pan. Enter, my son. He is one of those, who cannot pass a stove without stirring a pot, flipping a pancake, or sniffing a stew. He decided that I was not cooking the naan long enough and took over. 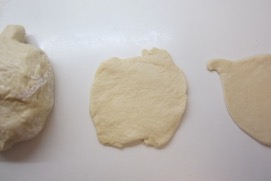 7. It was perfect. I rolled the dough and he fried it. A great way to spend some fun time with my son. 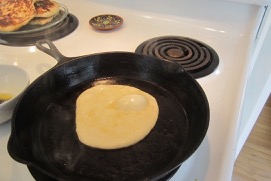 I covered the stack of naan with an overturned bowl and proceeded to make Butter Chicken, another post on J's World Kitchen. I'll save my take on it for another day, when I remember to take pictures. 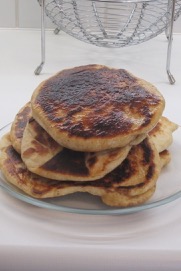 Have a tasteful day!