During the shut down for this pandemic, retail has "kept a light on" by doing curb-side pick up, as well as, shipping out and deliveries. I have ordered a few things on-line and specified curb-side pick up. Well, spell checker decided to change "curbside" to "curtsied." I'm not sure why. I thought it was just me, until the other day, I saw a post on FB from a Toronto blog I follow. They had listed one of the ways you could collect your on-line order, as "curtsied" pick up. Eureka! It wasn't just me!! 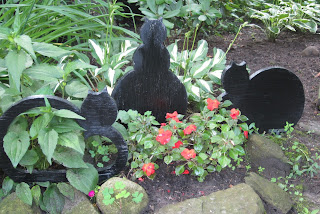 Now, who should be doing the curtsying? I might, but I'm inside the car, with the trunk open. The store employee is too busy running my order out to me, that it wouldn't make sense. Plus they are at the back of the car, in jeans and a mask. Somehow the grace of a curtsy would be completely lost, especially if the curb-sider were male. Sigh! 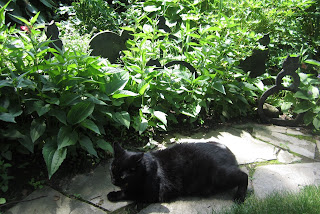 Alas, ordering on-line, even without the curtsy, has its drawbacks. I tried to order garden soil from a nursery only to be told, in a note on-line, that soil was not available at my chosen location. Well, I saw it there, yesterday. I called the store and had soil added to my order. I curtsied on the other end of the phone. 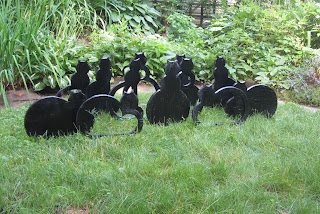 I tried to order wood stain at another store. I found the stain, but it had to be tinted. However, there was no way of adding the colour of tint to the stain, on-line. I did not curtsy. Plus I had several other items to order including "fairy lights" (it's an English thing) for the apple tree. Maybe no midsummer dancing and curtsying this year in the garden. I also needed to buy spray paint for my garden ornaments - twelve wooden cats - they needed to be "refreshed." Again maybe not this year. Anyway, I've never seen a cat curtsy, a dog, yes, but a cat, never.

The pictures? My cat ornaments, plus the real life model. I bow to cats :)

Have a fulfilling day!