Really my life should be very simple. I'm retired - sort of. I'm not a doctor. I don't have to make life and death decisions. I don't have to count ventilators or keep people out of parks. All I have to do is cook, clean and craft. I don't even have to feed the cat - the kids do that. So why can't I just keep it simple, you know KISS.

Well, I really think that I am actually keeping it (life) simple and then the gremlins come in and make it very complicated. Here's what I mean. 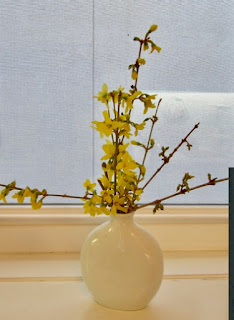 1. The other day my husband decided to refresh the Forsythia we had brought in for forcing the week before. He was heading out to cut a few more twigs, when I said, "Wait a minute there are a few very long branches that need to be pruned from the bush. Why don't you take the bigger clippers and cut off one of the limbs, then we can use the twigs at the end of the branch for forcing?" 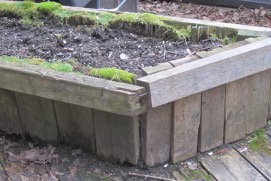 This is where it got complicated. The limb didn't come down with one cut. It needed several and each piece needed to be pulled from the tangle individually. Eventually, there was just one piece left. However, it refused to yield. In fact, we all tried to pull it down, only to fail miserably. Finally, my son climbed onto a wooden flower box to give the limb one last yank. Well, you guessed it. The flower box collapsed; my son landed in a nearby flower bed and the branch, undisturbed, remained in the tree. Alas! 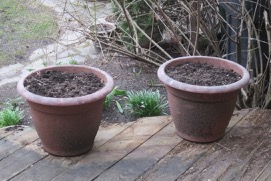 At this point, I decided that, really, clipping a few twigs would have been a much simpler idea. Now we have to dismantle the broken flower box, remove the soil and decide what to put at the edge of the deck to stop more people from falling into the flower bed. Sigh!

The complications, however, did not stop there. Here is another one.

2. The other night about 4:00am a car alarm sounded outside on the street a few houses east of us. It woke us up. Someone would hear it, go outside and turn it off, I thought. No one did. It beeped on..and on..and on. Then it would stop for a second or two and start up again. I tried sleeping through it. Maybe I did for a while or maybe I just thought I did. Anyway at about 7:00am, I finally got up and decided to help everyone out by calling the police. I called their non-emergency number or at least I thought I was calling their non-emergency number.

Here is the back story. We have a list of phone numbers on our fridge, mainly the numbers of people our kids might hang out with, in case we needed to call. Plus the non-emergency number of the police. Well, somehow we mixed up the number of the parents of a friend of my eldest and the police's number. We found this out about eight or nine years ago, when our youngest was overdue home one very cold night in January and we called the police to see if they had found anyone in a snowbank.

You guessed it. At two in the morning, we had actually called the home of my son's friend's parents (is this complicated enough). They recognized our name and called their son, who was now married and in his own home. Our friend called our eldest in the morning and he contacted us. "What was going on?" To make a long story short, everything worked out OK and we were forgiven. I took the parent's number off the list and said this will never happen again.

Well, it did, because I hadn't realized that the numbers had been switched and the number beside the police was actually the parent's number. I had in fact deleted the police's number, not the parent's number some eight years ago. So when I called the police at seven in the morning, I actually called the parents. They recognized our name. They called their son, who called our eldest, now in Calgary, at the equivalent of 6:00 am. He called us at 8:00am. Oh God, how I hate caller ID. We called them later and apologized and erased their number, again. There's something to be said about updating lists every year or so, rather then every decade. 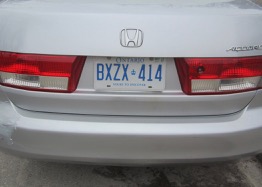 I finally did get through to the police, however, who said it wasn't a police matter and referred me to the city. I called 311 and was told that during the pandemic, they weren't dealing with this sort of thing. My answer to them was, "What if there's a dead body in the car?" He laughed.

I'm waiting to have him laugh on the other side of his face, because, it's been two weeks now and the car is still there. It doesn't have a parking permit, so it is not owned by anyone on the street. We believe it is an abandoned car and yes, there may still be a dead body inside.

I have no intention of calling the police or the city again.

Oh, and did I mention that my husband woke up with a pinched nerve in his back, because of the stress of the car alarm and was in excruciating pain for several days. Not exactly a dead body, but not exactly capable of doing anything either.

Have a quiet day!!