Our writing word for today is "key." It's a word I gave to the writing challenge and it came to mind because I am "key" challenged. I have more keys than locks. I have little tubs of keys, scattered throughout the house, which belonged to locks at one time - but damned if I can remember which ones.

I even carry several keys on my current key chain that are orphans. I couldn't tell you which doors they open and yes, why do I still carry them around with me. I wonder, in more wistful times, if they opened doors to a Narnia somewhere. Maybe I secretly dream of escapes, so I keep keys to open those doors, should the opportunity ever arise. I do not, however, horde maps - my husband does, hmmm. 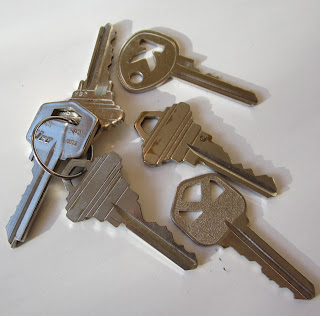 Actually we both had a "key day" last week. My husband was looking for a key to the front door, which we never use - both the door and the key. Somehow opening the front door or at least finding the key to the front door became the challenge of the day. None of the keys worked. We threw them out. Then in the middle of the night, of course, nothing sane ever happens during the day, I remembered that the reason the keys didn't fit was because the lock gets "bunged up" with dirt. I didn't bother to ask how or why. 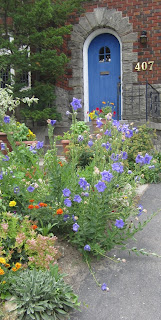 I then remembered that on another "key day" I had cleaned out the dirt with a paper clip and Voila! the key worked. I wish I had remembered this earlier, I could have saved us a few bucks, well maybe quite a few, because the lock is an antique and the door is not a standard size and so to replace the lock is a custom job!!

Mundane matters like, saving money, aside, I can see the plot of a story, unfolding - You just happen to have the key to open a mysterious door and an adventure begins - Alice in Wonderland comes to mind.

Have an awesome day!!
Posted by Carol Tomany at 9:24 AM