Our word for today is synchronicity - meaningful coincidences. We've all had them. It's that time when you said, "I was thinking of calling, so and so, when all of a sudden the phone rings and it's so snd so." There is a theory that there is a time in the universe, when concepts were meant to be. Several people working on the invention of television, for example. They are in different parts of the world, do not know each other, but they all are working towards the same end, TV - another meaningful coincidence.

Perhaps there is a time when things just need to happen, in the world or in your world. That's when the energy in the cosmos bubbles up through a few individuals, including you. You happen to be directed to a certain place or to a certain person and voila, you both get an idea, or put two and two together. This would be synchronicity. 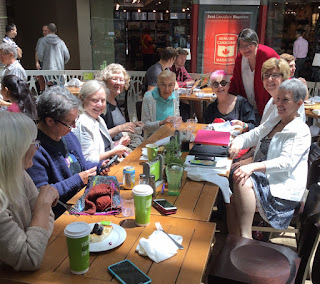 I have had a few meaningful coincidences in business. Once I was looking for other products to distribute, to replace my pattern sales, which were moving to online pdf downloads. Out of the blue, a Clover rep. called and asked, if I would be interested in distributing for Clover. These coincidences have happened again and again. I think that the cosmos wants people to keep knitting in a meaningful way :)

Another chance call from a store in BC, asking me to carry Bhedawool and TrueFelt sheets has turned me into a needle felter. I just happened to be looking for something other than knitting needles and knitting gadgets to do some creative work, when the call came in. Right now, I am looking around for a very simple yarn line. I thought I'd just send this message out over waves out there and see what happens.

The picture? All eight of us have met coincidently over the years through knitting. We now all teach at the same retreat each year in April. Coincidently, my writing partner is sitting beside me - meaningful synchronicity.

Have a wonderful day!
Posted by Carol Tomany at 4:14 PM