I know I said in my last post that my writing partner and I were putting the word-a-day posts on hold for awhile. Well, we can't stop writing, even though we are writing 3 pages of long hand every morning. The compromise is - a word every other day. Our word for this day is "sisters."

I have three sisters. One biological sister and two adopted. I also have a biological brother and one sister-in-law. It's interesting how relationships change. My biological sister is closest to me in age. She's actually three years younger. We are very different people and for many years, we were never close. In fact, I was closer to my next sister, who is eight years younger than me and adopted. 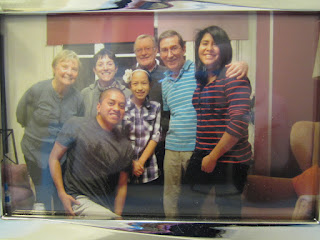 Over the years, my biological sister and I have become friends and have distanced the next sister, who has shut us out and manipulated our father into giving her the family home. The only daughter he remembers, besides the one who lives with him, is our youngest sister, because she rode horses, one of his many loves.

Blood may not run thicker than water. My closest sister is the one who is researching the family tree and has found hundreds of cousins. We still have thirteen first cousins we keep in touch with and many second and third cousins, my sister is in touch with. The remaining DNA we had to capture, to extend the cousin count, is from my brother, who had gone missing for years.

Well my sister e-mailed me the other day, to say that she has found our brother and he is well, sober and working part-time. He's quite keen on doing the DNA "stuff." Maybe we'll get to be a little closer, now.

The picture? Our immediate family, minus one son, with my husband's sister, brother and our niece. People talk of "family planning" as though it were something you could organize, like a holiday. They have no idea!!
Posted by Carol Tomany at 9:26 AM