Our word for today is "circuitous" - in a round about way. Some of its synonyms are - meandering, serpentine, tortuous. I love meandering and serpentine. These are leisurely words - garden paths serpentine and rivers, especially old rivers, meander.

Tortuous is something else entirely. People often take circuitous routes to get to where they are today. In some cases these routes might be very tortuous. I think of people having to leave their own country to come to Canada. Not only do they have to retrain themselves, they have to learn a new language, a new culture, and a whole new set of rules. On the other hand, some people don't have to leave the country to take on a new life. I think of people who come "out" as gay. Surely there is a whole new life style to be learned. I know of a family with a transgendered child. They had to grieve the loss of a daughter and accept a new son. This was very difficult, especially for the extended family. 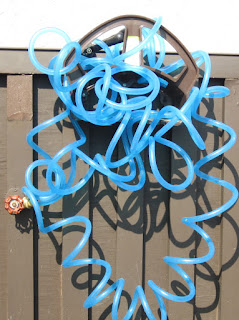 I can often construct huge circuitous routes to avoid doing something. I remember having to do some fund raising once. My idea was to send out letters of request, do a telephone follow up and finally go in to collect a donation. Clearly, I hated asking for money. The person working with me said, "Forget it. Let's just go into the stores and ask for money or merchandise." It worked, whereas, my idea was so convoluted, that it probably wouldn't have worked. 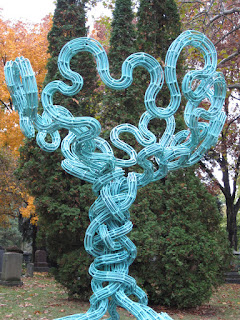 I was talking to a friend the other day and invariably we were talking about how some people complicate their lives. She had a friend, who sold up in Toronto and moved to Stratford, because she needed the money. She is now moving back to Toronto, because she has met someone, online, who lives here and they are buying a house together - more of a shuttle that a labyrinth - but still circuitous. We were also talking about another friend, who was about to lose her job as a doctor, because she couldn't get to work on time. Finally she got a friend in BC to call her in Toronto at 7:00 AM to get her up. I'm not sure I would get up daily at 4:00AM to call a friend half way across the country. It's one thing to complicate your own life, it's quite another to complicate the lives of others.

Have an uncomplicated day.