Our word for today is cigarette... I want to say it's an old word. Not many people, I know smoke and the ones that did are dead. But there was a time, in film particularly, when smoking added to the allure of life. Most movie stars smoked and the famous ones are remembered for their cigarette roles or maybe that should be rolls.

I think of Humphrey Bogart. He may have had a cigarette in his mouth in Casablanca, because that was what made you cool. Your props were a martini and a cigarette (were they funded by the tobacco companies?). I think of Marlene Dietrich, Lauren Bacall, or every cowboy you can name. What made you was a fag hanging out of your mouth or held between fingers - first and second or first and thumb. The positioning said so much.

We have, now, had to invent new ways of being cool. I don't watch a lot of movies, so I'm not sure, what those ways are.  I look at handhelds. Certainly the phone has become a focus, as have sunglasses. Are there some classic photos with twirling sunglasses, or the ear on shoulder sandwich with phone as filling? Not sure. I choke at the thought of tattoos. Do you think that our status is, now measured, not by the number of cigarettes we smoke, but by the number of tattoos we sport? Have we just traded one organ for another - lung for skin or something like that? 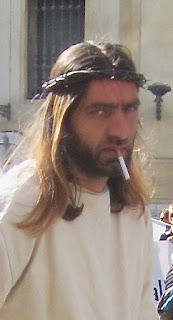 My mother never smoked. She said her father put her off it, by having her take a deep drag of a cigarette, when she was quite young. She threw up and never tried it again. My father smoked until he was thirty. He gave it up one day, giving all his cigarettes to the first guy he saw on the street that smoked. That was 73 years ago. He's now 103. My grandfather, a heavy smoker, who rolled his own, died of lung Cancer at 63. It's a numbers game.

I smoked when I was at university and quit in my first year of teaching. I had a bout of Bronchitis, which was aggravated by cigarettes. It cured me. My husband has never smoked. My sister-in-law smoked cigarillos, again as a affectation. She quit when she became a vegetarian.  My kids, if they do smoke, do it sporadically. I don't smell tobacco on clothing in the house. I have to believe that the advertising campaigns against smoking are working, at least in Canada.

The picture? The question still remains, though. Did Jesus smoke?
Posted by Carol Tomany at 8:13 AM