I enjoyed writing my blog on nicknames so much, that I decided to do another for all the names I had missed. Most of these names would be for places rather than people. Wikipedia lists more monikers than you will ever need in a lifetime, here.

1. The Great One - Wayne Gretzky - Canadian, Hockey player - says it all.
2. Satchmo - Louis Armstong. I've seen him perform several times and my youngest loves him.
3. Auld Reekie - Edinburgh. I've written about her before and my sister-in-law lives there.
4. Hogtown - I prefer Toronto, the good. I live here and still give directions using terms, such as, Hog's Hollow.
5. Cowtown - Calgary. My son lives there now. 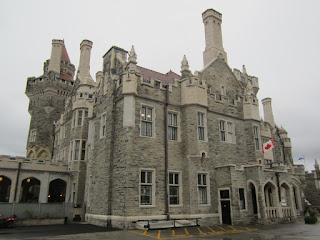 I am inclined to give people nick-names, they may never hear. Her Shrewishness, for example, for someone who is difficult. Our Lady of the Cats for someone who has too many cats. Or fill in the blanks with Our Lady of the Dogs, Birds, Rings - really for anyone known for their excesses. Miss Manifest for someone with a presence. Mistress Murky for the low life or Mister Misfit for one who never seems to fit in.

I'm sure others do the same, but keep the names to themselves, as I do, so they never become commonplace.

The picture? Casa Loma in the city of Wishfulness and the season of Mistfulness. Spell checker wanted to change the last word to wistfulness, maybe a comment on the post. I love playing with words.

Have an entitled day.
Posted by Carol Tomany at 11:50 AM