....... In The Hitchhiker's Guide To The Galaxy a super computer determined that the meaning of life was/is 42. Naturally I assumed that this was a wry joke on the meaninglessness of life - can I say that? Maybe an accountant would understand - break everything down to a number and you've got the answer or something like that.

Well shame on my ignorance!! It took a note on FB to clarify the "concept of 42." Apparently the author of the book, Douglas Adams, was a computer nerd and knew several computer languages including ASCII. The asterisk (*) in ASCII actually means - "Whatever you want it to mean" and to create an asterisk in ASCII you enter the numerals 42.

The meaning of life - 42 - then becomes "Whatever you want it to mean." 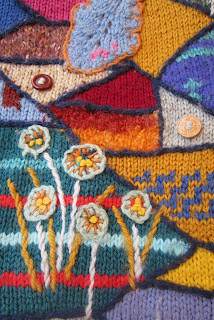 So, applying the statement to this blog, the meaning of life, for me, would be "Whatever happens." Well, on the surface, maybe. But I like to think that, whatever happens has more of a cosmic meaning, rather than just the randomness of life.

The full statement is, "Life is what happens, when you are making other plans." So, again, you might set out by making life mean - whatever you want it to - and then your plans get rearranged because reality happens.

Maybe I should say "Life is Reality." I don't think so. I still want to believe in dreams, in fantasy, in Art or in the art of making life what you want it to be or mean.

Now, do we have to have a discussion of the difference between "being" and "meaning" - maybe another day.

The picture? It's a section of a sweater I knit in a pattern known as "crazy quilt." That is - you create the article, or garment by piecing random scraps together to form a harmonious design. It originally applied to fabric, but I created a randomly patterned fabric by knitting scraps of yarn together.

I am always surprised when life, however pieced together it may seem, turns out to be amazing.

Have an amazing day.
Posted by Carol Tomany at 8:43 AM