Tomato Soup for the Soul...

......I know the book is "Chicken Soup for the Soul," but our area of Toronto has not, as yet, been designated a "live chicken" area, so I didn't have any chickens alive or dead to make chicken soup. However, I did have lots of tomatoes!!

I have become increasingly wary of mass produced food, delicious, as it may be, with all those additives. As a result, I've been trying to get as much unadulterated food as I can into my cooking, on my table and subsequently into my body!!

I'm not yet at the point where I want to move to a farm and house livestock, however, this year, I turned my front lawn into a market garden. I planted tomatoes - big and small, red and yellow. I planted aubergines (eggplants) all long and tubular and I planted peppers, red, green, yellow, sweet and hot. Beans and peas were varied in their output and Zucchini needs to learn how to grow in shade!! Did I mention that cucumbers disguise themselves and are only noticed when they turn yellow and Romaine lettuce, a little tough at times, is my knight in shining green armour. 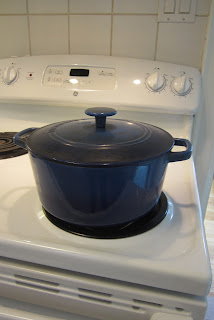 I have always had herbs in pots, however, this year, I was able to increase my basil plants in the garden, thereby freeing up more space, in the pots, for parsley, chives, thyme, sage and rosemary - I feel a song coming on!!

Now, I have the 10 foot diet, better than the 10,000 mile diet. Ten feet from my front door, I have the ingredients for pasta sauces, soups, almost any vegetarian meal, gifts for neighbours, food for raccoons, etc. etc. Fortunately gardening and cooking are chores I don't mind, which is lucky, indeed, because there is always too much of everything in September and lately October. This is how it came to pass that I spent my entire Thanksgiving weekend cooking. It was, however, very therapeutic. I not only fed my body, I fed my soul, reaching Nirvana with my tomato soups. 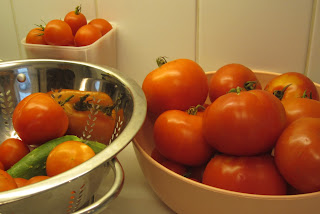 Here is how it went.

1. Our friend, Brenda, came for Thanksgiving dinner on Friday night. Brenda knows everything about cooking and mentioned that she often made her own tomato soup. Wow, was I impressed!!

2. I searched on-line for some easy tomato soup recipes and adjusted one I found from the UK to my style of cooking. It was very easy to start with, but I made it even easier.

3. The recipe called for 2 pounds of tomatoes - about 10 tomatoes. Well, in my haste, I confused the numbers and thought I needed 10lbs of tomatoes. After coring and chopping 5lbs, I re-read the directions. My husband thought this was hilarious, until I mentioned that he could be eating tomato soup for breakfast!!

4. I hauled out my cast-iron casserole, which was the only pot big enough for all the tomatoes and I began cooking. Did I mention that I love using this heavy but beautiful pot. It takes me to rural France, every time I lift the lid.

5. To two tablespoons of butter and two tablespoons of olive oil, I added two chopped onions and sweated everything over low heat with the lid on for about 10 minutes. I then added 5 cloves of garlic crushed and half a teaspoon of sea salt. 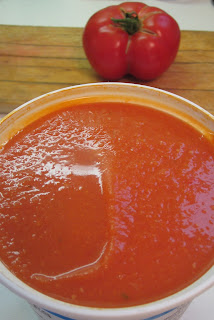 6. To this mixture I added 5lbs of tomatoes cored and chopped. Yes, I could still get the lid on. After the tomatoes had softened and disintegrated into a watery mass. I took the lid off and added 3 or 4 sprigs of fresh thyme and about six leaves of fresh basil. I added some black pepper, a little more salt and two whole dried chilli peppers. I did not add a spice such as nutmeg, cinnamon or cloves. The UK recipe called for Garam Marsala, which I skipped.

7. Everything thickened nicely, so I didn't even add the two tablespoons of rice called for in the original recipe as a thickener and skipped the extra cup of water and two more tablespoons of butter - whatever was she thinking!!

8. After using my immersion blender, I pushed the whole pot (contents of the pot, that is) through a sieve and ended up with a very creamy - no cream added - mixture. That tasted wonderful!!

This was a soup with the only chemical addition being sea salt. The tomatoes were organic, of course, as were the basil leaves and thyme sprigs. The onions and garlic were commercial and the butter and olive oil may have been doctored, but I didn't add water (city water) and no extra flavour enhancers.

I loved it so much, I took all the tomatoes I had cored and frozen in the small freezer of my fridge and made another batch - make that 3 batches, I had another 5lbs of tomatoes.

Nirvana, thy name may also be Big Boy or Bonnie Best. Next year, all I'm planting are heirloom tomatoes, to avoid any that may be genetically modified.

Have a slurpy day!!