On the sex life of the Holly

Most gardeners know that Ilex or holly needs a partner - another holly tree or bush, to have them both produce those gorgeous red berries so popular in winter, when everything else is bland and grey.

Several years ago, a horrific ice storm took one of our holly bushes, not to mention many limbs from our maple tree and a few other arboreal casualties. OK, the maple is self pollinating, and I made sure that the fruit trees, I planted, were as well. However, the hollies weren't.  I wasn't sure which holly had died. Yes, it was the one on the right, but was that the male or the female or as they are known at the garden centre - the prince or the princess. 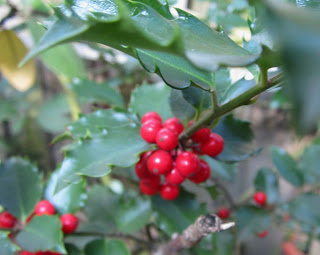 Every spring when a few blossom would appear on a couple of twigs, I promised myself that I would find time to take a cutting to the garden centre and find out if my bush was either male or female. I needed to know whether to buy a prince or a princess to replace the one lost. Time, of course, was never found and the mystery of the sexual identity of my holly bush was never solved, even though, I was sure it was female, because of the blossoms.

This year to everyone's surprise, we have red berries on the mystery bush!! Eureka, a transgendered holly or at least, a bi-sexual one.

I never cease to marvel at the inventiveness of nature. It makes its own rules and is never swayed by mores imposed upon it. It changes, as needed, to accommodate the situation and it gives us pleasure in the most infinitesimal ways.

Holly, by the way, is sacred to the fairies and is said to protect man from evil. It is an ancient plant with mystical powers. Well, it magically transformed itself in our garden. Please share any holly stories you may have.

The picture - a holly sprig on the sacred bush. We place a piece of holly at everyone's place setting on Christmas day. I prefer it to tinsel.