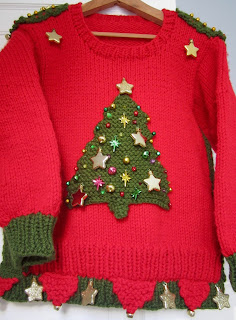 Sometime in mid-November, my youngest was telling us about a planned Christmas party at his work. There was to be a "Secret Santa" gift exchange and an "Ugly Christmas Sweater" contest. He loved the concept of the ugly Christmas Sweater!! (In my heart, I wept - how did beautiful Fair Isle motifs, in red and green come to this, sigh!)

Nicholas (Yes, named after St. Nicholas) also loves clothes, in all their finery. He has taste, I might add, and the ugly Christmas sweater is the antithesis of this taste. He mentioned the "ugly Christmas sweater" last year, as well. To him it's a clothing joke and he wanted to have one, just for the fun of it!! This year, he started describing, what he considered ugly - "I just want to put a mess of something right in the middle of the sweater!!" 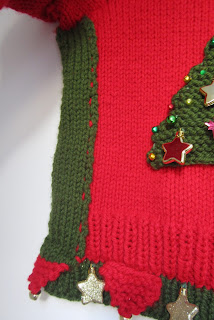 I rose to the occasion. Yes, there are things in knitting that some consider ugly - chunky acrylic yarn comes to mind. I knew I had inherited some chunky acrylic from my mother's stash, and it was actually in red and green - what could be more perfect. Clearly someone else had started and then abandoned an ugly Christmas something, a long time ago.

On 8mm needles the project would be quick. It would not only feed my need to design "costume," but it would also be a challenge, to make something "ugly" in an amazing way, if you know what I mean!! 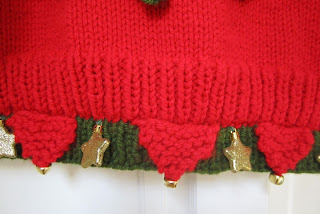 Together, we decided on a Christmas tree in the centre of the sweater, which could be decorated with jingle bells and flashing lights - I love song and dance!! Somehow ugly was starting to be a lot of fun!!


I found the yarn, which was still bright and cheery and I also found my 8mm circular needles. A quick read of the yarn label gave me the gauge and a measurement from an old sweater gave me the width. I cast on in red. After the first skein, something didn't look right - It was way too big. I am a loose knitter, but really. 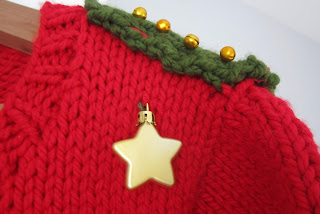 I ripped it out and started again. This time I had done front and back and grafted the shoulders together. Nicholas tried it on - too small. Ugh. The journey was becoming ugly as well. However, this time I had gone too far. I wasn't ripping it out again, so I decided to cut a steek from the underarm to the bottom of the ribbing on both sides of the sweater and insert two green panels. It worked - sort of. I attached the panels with red saddle stitching to make them look, as though they were an intended aspect of the design - more lies that knitters tell themselves!!

The sweater finally fit in the body, but it was now too short. Well, it might have always been too short, but I hadn't noticed, in my horror of its being too small in the first place.

I could add some tabs that tapered and held a jingle bell, maybe. No, not fancy enough. Finally I picked up the bottom edge and knit another band of ribbing, this time in green and added tabs of red with gold jingle bells attached. Ugly is starting to come together!! 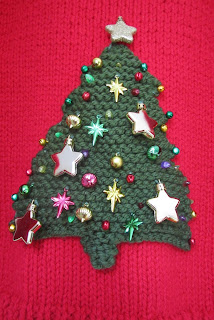 I added epaulets in green at the shoulders to give the side panels a little more presence and I decorated the epaulets, giving them a little more presence, because of the highly decorated ribbing. It never fails. Somehow you can't just add a little something here and there - you have to add a lot of everything everywhere to make it all work!!

Several trips to the dollar store netted lots of tiny, gaudy Christmas decorations and my husband found some flashing lights at another dollar store near his work. I love family projects.

I knit a Christmas tree in garter stitch, sewed on a dozen or so decorations and stitched the tree to the front of the sweater. The battery for the flashing lights could be slipped into the bottom of the tree and activated later. I've got my fingers crossed that the battery actually works and the lights will flash!! 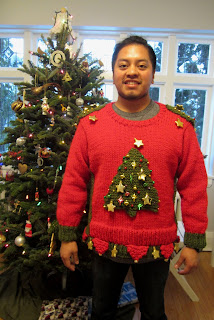 Finally an "Ugly Christmas Sweater" tastefully executed such that all the mistakes were incorporated into the design, ;) the design works, the sweater fits and my out of pocket expenses were less than $10.00. My son will now go to his Christmas party as a cross between one of Santa's elves, the nutcracker and maybe the little drummer boy.

I'll let you know if he wins!!

Have a Merry Christmas!!