...I love, you love, he/she loves....Well, it is that time of year, when everything else fades in the magic of lights, music, family, friends and good cheer.

I couldn't resist posting, on another knitters thread, this link to a site that lists the conjugation of the latin verb, amare - to love, in all its many tenses - intense. Here it is -

Just in case you needed a bit more of that love or another variation, be it - conditional, subjunctive, pluperfect or yes, future perfect :)

I always marvel at the fact that some languages have very few or no tenses at all, for their verbs. They live, for the most part, in the eternal present. On the other hand the English language has one of the most complicated, dare I say twisted, network of verb structures known to man.

It must have something to do with the angst of the English. Or as Macbeth said -

If it were done when 'tis done, then 'twere well
It were done quickly; 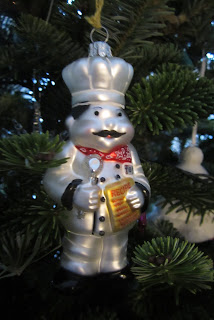 Well, maybe not that quickly, when you consider all the time taken to ponder the nuances of what's to be done. Would the deed or event, be done imperfectly, never quite finishing or would it be done so completely that it would be considered pluperfect, a sort of uber perfect. Then again, would it be done conditionally or horror of horrors, subjunctively - whatever that may entail!!


No wonder the Brits are often considered a somewhat sedentary culture. Yes, they have produced prodigious writers and scholars, but they aren't really know for their actions - very little, beyond a few wars, actually "got done" over there. However, a lot got pondered!!

But I digress. Let's get back to the Love - amore, amores, which is a masculine noun - surprise, surprise and the ablative plural is amoribus - it is also the dative plural. So it begs the question did all love really start with a date on a bus?

I'll leave you to ponder that. The picture? Just cooking up a bit of silliness for the holiday :)