Why can this not be done when my husband is home? Well, he's picky, likes to have "proper meals," not particularly fond of left overs and I could go on... but not tonight.

So to date I have managed to use up some leftover cornmeal in a cornbread with pulled pork. I don't think that my husband has ever had cornbread - polenta, yes - cornbread no.

There were a few other suspicious looking packages in the freezer, which, when thawed, were used with pasta - that great dinner escort service!! Yes, they were identifiable. I think one of them was Haddock :)

However, there were still a few things left, that may have been there since the Ark. Most notably, there was that pepperoni which costs $6.00 and I was damned, if I was going to throw it out!!  Well nothing says pizza like pepperoni, so I decided that we would have homemade pizza for dinner. Here's how it went.

1. I had a package of yeast in the cupboard. I know that they have found yeast in Egyptian tombs, so I was sure that mine would still be OK.

2. I had already bought some prepared tomato sauce for pizza - usually against my principles, but, if the yeast was really prehistoric, then, why waste time and money making a "proper tomato sauce"?

3. I thawed the pepperoni, bought pineapple, for my daughter's side of the pizza, and some mushrooms. Fortunately everyone loves mushrooms. 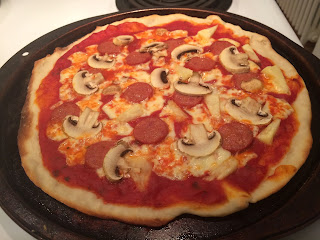 4. I made the dough and left it to rise. Waiting for dough to rise, is a little like waiting for Godot - somehow it never happens. So, when it didn't, you know rise, I had to get inventive. Finally I cranked up the volume, so to speak, by putting it in a very slow oven. It worked.

5. I thought there was just enough dough for 1 pizza, - obviously the Egyptians never made pizza. However my daughter thought that we really needed two pizzas. I cut the circle in half and proceeded to make a circle from a semi-circle. Euclid must never have used dough for geometry - just a little too malleable, for the rigidity of his math. I needed an Escher!!

6. With much pulling and prodding we got the crust into the circular pan and worked it into a "sort of" circle.

7. My son took over grating the Mozzarella. Clearly my slices were not fashionable enough.

Finally the "pies" were oven ready and the oven had stopped smoking from the last accident that went in there. Why we have smoke detectors, when they spend most of their time off the wall!!

It might have been a quiet, even artistic 15 minutes of texting their dad with photos of the pizzas in progress had the neighbours not decided that it was Guy Fox night, as far as they were concerned and all Hell broke loose. Our door was open because of our smoke and their back yard was ablaze with bonfires and fireworks!! Every time a firecracker exploded, I thought it was the oven and we were doomed!!

Now, I know that I will never be a stage manager - getting recalcitrant actors to perform - dough, taming pyrogenics that work overtime - oven, working with prima donas - neighbours and still having to put on a performance - pizza for dinner - not for me.

Give me a Shakespearean sonnet over Taming of the Shrew and I am a happy camper.