The Fine Art of Escape

Art is a great healer. It takes the mind and the heart from the troubles of the day to a different space, a different time, a different world. Maybe that's why so many artists seem so "spaced out," most of the time -  they are someplace else.

I have been doing some fibre Art lately, namely needle felting. Here is my first attempt. 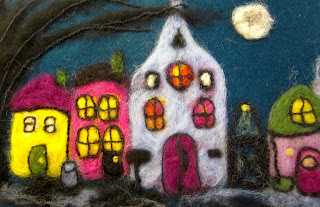 On the morning after a great American tragedy, I have begun another retreat. Here is a work in progress. 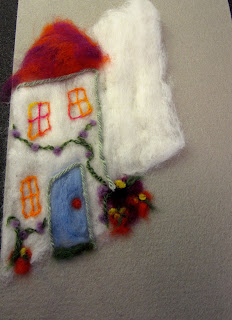 Today and for sometime to come, I will create places that nurture the soul. Through Art, Peace and Love shall prevail.

Have a healing day!!
Posted by Carol Tomany at 9:38 AM No comments:

Why can this not be done when my husband is home? Well, he's picky, likes to have "proper meals," not particularly fond of left overs and I could go on... but not tonight.

So to date I have managed to use up some leftover cornmeal in a cornbread with pulled pork. I don't think that my husband has ever had cornbread - polenta, yes - cornbread no.

There were a few other suspicious looking packages in the freezer, which, when thawed, were used with pasta - that great dinner escort service!! Yes, they were identifiable. I think one of them was Haddock :)

However, there were still a few things left, that may have been there since the Ark. Most notably, there was that pepperoni which costs $6.00 and I was damned, if I was going to throw it out!!  Well nothing says pizza like pepperoni, so I decided that we would have homemade pizza for dinner. Here's how it went.

1. I had a package of yeast in the cupboard. I know that they have found yeast in Egyptian tombs, so I was sure that mine would still be OK.

2. I had already bought some prepared tomato sauce for pizza - usually against my principles, but, if the yeast was really prehistoric, then, why waste time and money making a "proper tomato sauce"?

3. I thawed the pepperoni, bought pineapple, for my daughter's side of the pizza, and some mushrooms. Fortunately everyone loves mushrooms. 4. I made the dough and left it to rise. Waiting for dough to rise, is a little like waiting for Godot - somehow it never happens. So, when it didn't, you know rise, I had to get inventive. Finally I cranked up the volume, so to speak, by putting it in a very slow oven. It worked.

5. I thought there was just enough dough for 1 pizza, - obviously the Egyptians never made pizza. However my daughter thought that we really needed two pizzas. I cut the circle in half and proceeded to make a circle from a semi-circle. Euclid must never have used dough for geometry - just a little too malleable, for the rigidity of his math. I needed an Escher!!

6. With much pulling and prodding we got the crust into the circular pan and worked it into a "sort of" circle.

7. My son took over grating the Mozzarella. Clearly my slices were not fashionable enough.

Finally the "pies" were oven ready and the oven had stopped smoking from the last accident that went in there. Why we have smoke detectors, when they spend most of their time off the wall!!

It might have been a quiet, even artistic 15 minutes of texting their dad with photos of the pizzas in progress had the neighbours not decided that it was Guy Fox night, as far as they were concerned and all Hell broke loose. Our door was open because of our smoke and their back yard was ablaze with bonfires and fireworks!! Every time a firecracker exploded, I thought it was the oven and we were doomed!!

Now, I know that I will never be a stage manager - getting recalcitrant actors to perform - dough, taming pyrogenics that work overtime - oven, working with prima donas - neighbours and still having to put on a performance - pizza for dinner - not for me.

Give me a Shakespearean sonnet over Taming of the Shrew and I am a happy camper.

Posted by Carol Tomany at 8:17 PM No comments:

.......Well maybe not. Last week my brother-in-law passed away. Death is always very sad. It can be ameliorated by age or circumstance, perhaps, but it is still a parting, an emptiness, that only the one who has passed, can fill.

It helps, though, to focus on the positives. I am happy to say that he was a good man. Although, he never married, he did look after his immediate family - brother, sister, nieces and nephews, when called upon, and he did create opportunities for the family to "come together," after their mother had died.

He was also very successful in his life's work, which involved computers from their early development - late '60s early '70s. OK, he wasn't an Alan Turing, but he did know several of the very early computer languages and worked with multinational corporations in Europe, Africa, Britain and Canada, developing "computer systems" for libraries - he was also an avid reader.

I am not sure that knowing computer languages makes you a linguist but my brother-in-law was also  fluent in English, French, German, Spanish and Italian. Scottish Gaelic was a language he was mastering, just before his death - not exactly a "dead" language, but it might have been a calling home.

Ironically, although, he was a linguist, he was not a conversationalist. Small talk bored him and he found people with small minds insufferable. Fortunately, he tolerated family. Needless to say, making conversation, at times, was a challenge. I often resorted to discussing the intricacies of a language to keep the conversation going, as it were.

For example, "in gaelic does the verb come first in the sentence and if so, does it explain the unusual sentence structure of those who speak it."

Alas, I have digressed. I need to get back to the ashes and the dust. However final it may seem, Death is a work in progress for the survivors. There are lawyers, government agencies, funeral directors, florists, friends, contacts etc., etc., to be notified.

There are the books, notebooks, keepsakes and curios of the deceased to be attended to and then there are the ashes. My brother-in-law requested cremation. Easy enough on paper, however, put into practice, this is how it went.


1. There are three crematoriums in Edinburgh - two are operational and one is closed for renovations. Remember Death is an industry.

2. There is a waiting list. Even in the afterlife one cannot escape the proverbial British queue. You may die in an instant, but it will take fourteen days to bury you.

3. Then there is the burial. Some throw ashes out to sea or strew them in a favourite public place. Still others keep the spirit on a mantelpiece or in a top draw. In fact, I can say "hi" to my mother, whenever I reach for my comb - she lives in my top drawer.....oops maybe I shouldn't have said that!

I had mentioned to my husband, if he had trouble finding a final resting place for his brother's ashes, he might think of  having them buried in the plot with his mother and father in Blantyre. Now, this is where things got really tricky. My husband said that, that particular cemetery was closed and although both his mother and father were there, there were several other people buried in the plot, as well, whom nobody knew.

Now, I ask you, do you know with whom you will be spending eternity? It may not just be a case of ashes and dust. There are all these other considerations and all the skeletons, so to speak, that come out of the woodwork. Death is not for the faint of heart and it takes more than a certificate to say you have gone. In fact, if you think about it, you could literally hang around for a long time waiting for the powers that be to sort it out.

A little macabre, perhaps, but celtic humour tends to the dark side. It's a way of coping, let's say.

The picture - the family together, minus one nephew, on Christmas in Barcelona, 2012. He was loved!!
Posted by Carol Tomany at 9:28 PM No comments: