The first and maybe the last...highway!

One of our "must do's" after leaving San Francisco was to drive the Pacific Coast Highway. This is the iconic Highway 1. It actually begins somewhere in Washington State and travels down, on the very edge of the Coastal mountains, to somewhere south of the Big Sur, where it levels out and coasts, as it were, through, Ventura, Malibu and other surfing paradises to end up in the spread of LA.

I say that it maybe the last highway because of the breathtaking cliffs and the killer drops!! Careening around double or triple "S" turns, one has the feeling of an amusement park ride, which is self directed - go too close to the edge and you drop into the sea. Never do this with a suicidal maniac!!! My husband was driving. Fortunately, he is not a risk taker - well, he married me, but that's an aside.  I knew that I was in good hands, but I was on the edge of my seat, seat belts not withstanding, the entire time. 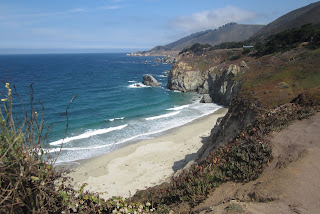 OK, we were the wimps. The deal is that you should actually drive this highway in a Mustang convertible, with overdrive. Many were, so much so, that I started to call it "Mustang Alley." We, however, had rented a sedate grey Nissan. This may have saved our lives. I couldn't imagine racing around those bends, at top speed, in a fiery red Mustang with attitude. I am not of the "you only live once group." There were, however, many, who were! They were the "cats," living out their nine lives!! 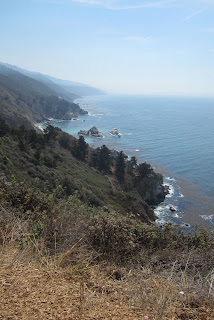 The drivers, though, were not the only risk takers. There were also the bikers - cyclists, not motorcyclists - who were peddling up and down, and in and out, these challenging curves, on a small slip of pavement, that framed the edge of an all too narrow two lane highway. The "tour de France" types, I knew were OK. They would make it. But I have to mention a family - mother, father and toddler (in a bike seat) struggling up significant inclines on a breath of pavement, that separated them from cars, which might have to move over, at any time, to give room to a huge RV coming the other way.

There are times like this, that I believe in God!!

I was also humbled by the cyclists who had "hand bicycles." That is, they were powering their bicycles with their hands, rather than their feet - an accommodation for amputees. They were a small group of male and female cyclists - young, fit and extremely courageous. When the wheels of a massive cement truck came within inches of a young woman in the group, I held my breath! Would that I could have been half as brave!! 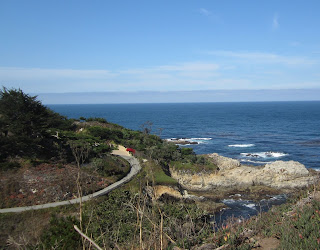 Highway 1 is a different world. It is not for the faint of heart and it is there to show us what can be done, with a lot of motivation, a lot of courage and did I mention nerves of steel!!