San Francisco and the vertical grid!!

I like cities with streets that form a grid. That is, the streets cross each other at right angles, so you have a very predictable lay out and getting lost can be easily corrected, if you know what I mean.


Toronto is based on a grid system and so is San Francisco. Unfortunately, for San Francisco the grid is vertical, rather than the expected horizontal. 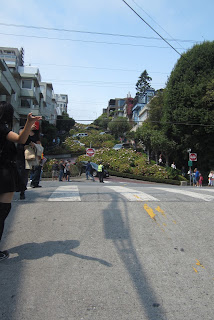 Yes, we did walk up and down a lot of streets, while on vacation here. However, I sighed a lot more. It's difficult to imagine, let alone actually walk, uphill at a 55º angle for five or six blocks, before reaching the top and, of course, our destinations always seemed to be either at the top or just over the hill - go figure!! 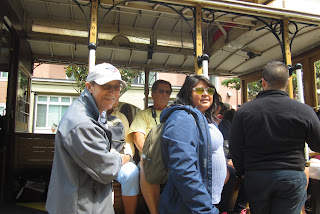 Fortunately, public transit in SF is very accessible. We rode the iconic cable cars, whenever we could get on one, took trolley buses to out of the way places and caved to cabs only, when everything just got too much!!

Luckily, we had rented a small apartment in Chinatown, which not only came with transit passes, it also happened to be right on two cable car lines, one down to Fisherman's Wharf and the other to Market Street. It was a convenient location, even if we had to hang onto the outside of a cable car or two, because of the crowds. Once, though, we were able to ride one that was totally empty except for the driver and the ticket taker - bliss!! 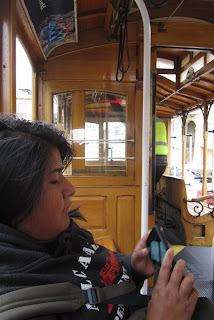 If riding public transit is tricky in SF, renting a car and trying to get out of the city is even trickier. I'm glad my husband was driving, because I'm not sure I could have driven up or down any of those hills, being a passenger with vertigo was enough. Maybe that "laid back" attitude attributed to the locals has actually been cultivated as a result of the physical ups and downs of life, which has then conditioned them to deal with life's emotional roller coaster. Just a thought :)

In spite of its challenges, San Francisco is an amazing city. It could just be a little warmer and a little sunnier - wearing flowers in your hair is optional!!

Have an awesome day!!
Posted by Carol Tomany at 9:34 AM