We ended our trip to San Francisco with a drive along Highway 1 to LA. We took our time and stayed at a few pretty places along the way. Carmel was our first stop. Again, years ago, we stayed here for an overnight. It's hard to resist streets of lovely boutiques, great restaurants and quaint inns, all leading down to the sea. This time, however, we decided to visit the mission. 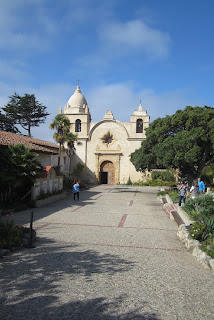 Sometime in the 1700s, Spain sent missionaries to California, to establish churches for the purpose of converting the indigenous people to Christianity. Today there are twenty-one missions in California. Many are still operating as Catholic churches, some house elementary schools, others sponsor retreats and still others, preserve what was, in museums.

One could easily make a holiday of a week or two simply by visiting all 21 missions. We missed the original mission in San Francisco - this, of course means, we have to make another trip!! However, in case we may not get the chance, Carmel made up for it. Gorgeous gardens, adobe cloisters and a beautiful church, captured a time that, unfortunately, has passed. Still on a lovely sunny day, with a warm breeze, one can imagine the peace, harmony and order of a congregation dedicated to the preservation and enhancement of colonial life. 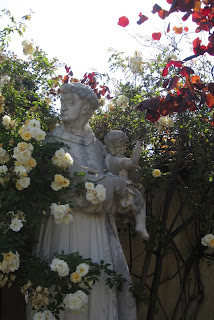 Never underestimate the power of the spirit, housed in the relics of the past - it lives and leaves its mark on the souls of the passersby - we are all one!!

Our next stop was San Luis Obispo. I chose it because it sounded like an interesting place. "Sound" being the operative word - Never travel with a linguist - they will take you to places you wish you had never heard of. Actually, over the years the name SLO - San Luis Obispo has come up on my radar too many times - articles in newspapers, magazines, the odd broadcast or podcast has mentioned its quadrants. I had to go there.

Well, "tick," I don't have to go there again. My husband took to calling it San Luis Abysmal. Well it really wasn't that bad. It was just a very typical west coast city. You needed a car. The shops all closed at 6:00pm. There were a few restaurants, more bars than you would care to count, and the mission was a "drive past." Sorry there were no gardens, it was in a nicely treed neighbourhood, but there really was no sense of history. There was something too suburban about it. 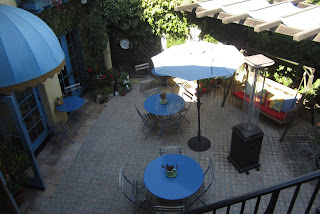 The nicest thing about SLO was where we stayed. It was a converted motel that looked like a slice of Provence!! It was called the Le Petit Soleil and was the one piece of magic in a rather mundane urbanscape. I have been to Provence, many times and I swear that this was the closest place, in North America, to Arles or Avignon, that I have seen. All the signage was French, the decor was influenced by various French artists and the courtyard was an oasis of potted plants, armoires, bistro tables and cobblestones. The fact that no one said "Bon Jour" or the staff struggled with basic French pronunciation could be overlooked. They may have been taken for students studying in France!!

Have an amazing day!!