City Lights, a book store and a way of life

I do like bright lights and a big city. After all, I was born very close to the downtown area of Toronto and although you may be able to take the person out of the city, I don't think that you can ever take the city out of the person.

Perhaps this is why I gravitate towards crowds. Although, I'm not a gregarious person, I do like the hustle and bustle of crowded cafes, restaurants, streets, and shops. Give me the chaos of a market and I'm at home!! 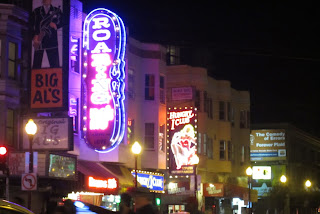 Every once in a while, though, I like to retreat to a quiet book store, perhaps or leafy park. City Lights Book Store, in San Francisco, was one of these retreats. Jutting into the throng of Columbus Street, City Lights offered a hushed silence within a myriad of small rooms all insulated from the fray by walls of books. Co-founded by the poet, Lawrence Ferlinghetti and frequented by Ginsberg and Kerouac, to name a few, City Lights was the womb, so to speak, of the beat generation - poetry, its mother tongue and antiestablishment, its guiding philosophy. I went in to feed my soul!! 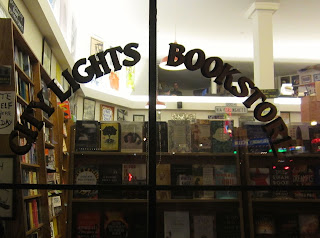 I bought "Aimless Love" by Billy Collins, a poet I read often and have even posted poems of his in this blog, from time to time. The title of the book, I thought, was appropriate, as a comment on the beat generation, which had rejected the establishment and created their own society based on Peace and Love.


Although the "summer of love" happened almost fifty years ago, there are still too many leftover hippies, remnants of the beat generation, sleeping in the streets of SF.  I saw them walking aimlessly though alleys or idling on street corners, wondering, perhaps, what has happened. These were the ones who believed that a person could live on love alone. That if they just thought Peace and Freedom, everything would work out. I know, though, looking into their faded eyes, their mangled grey beards and tattered clothing that everything has not worked out for them.

It's very sad to think that all their high hopes and lofty ideals have come to nothing. Unfortunately the freedom to just "be" is not "free." It comes at the price of discipline, focus, and a lot of hard work, directed towards a goal. Love, I think, should never be aimless - more on Billy Collins poems later.