In addition to lists and puns, I do like the odd challenge - "odd" being the operative word. Nothing too daring, but something a little unusual and just a bit beyond my grasp, so I have to stretch - but, not too much.

This is why I found myself on Fisherman's Wharf, in not so sunny San Francisco, renting a bicycle to ride across the Golden Gate Bridge. Well, it wasn't really my idea, but when the challenge was proposed, I thought, "why not." My daughter, you see, wanted to go the San Francisco. She graduated with a bachelor of community design (BCD) from Dalhousie and has decided to visit all the cities that were studied as examples of good community design in her courses. San Francisco was one of them. 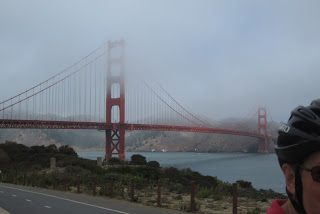 She is also a baseball aficionado and wants to watch games in all the iconic baseball parks. As a result, we have been to Boston - Fenway Park, New York - (the old) Yankee Stadium and now San Francisco and (the new) Candlestick Park. Yes, it's not actually called Candlestick anymore - too bad, but the view is still awesome - right out over the bay and the boats still hover in the water just outside the park, trying to catch the fly balls that sail, as it were, out from right field!! 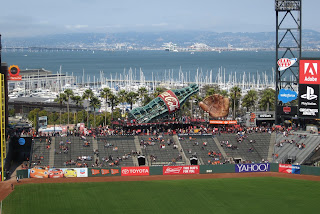 But I digress. We need to get back to that bike rental place on the wharf. Fortunately, the bikes were all the right size. They had helmets, of course, for the riders and water bottle cages!! Now you have to know that, although every one presumes that a water bottle cage on a bicycle is convenient, the positioning of them often is not. I hadn't realized just how inconveniently placed mine was, until I tried to dismount, suddenly. Yes, I almost impaled myself on the cage, which, fortunately, didn't have a water bottle in it, at the time, or things might have been a lot worse!! 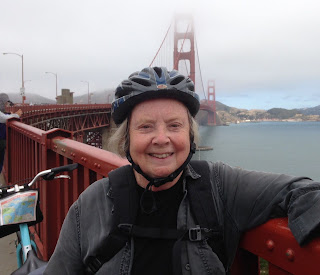 Needless to say, there was no time to go back and change the bike, so I had to manoeuvre my body rather delicately up over and around bottle cage, bicycle seat and whatever else was in the way, to protect myself from losing my virginity for a second time!! All this I had to do while negotiating throngs of walkers - with or without dogs, other cyclists - many of whom decided to stop at whim, mindless of anyone else in their path, and, of course, the odd stroller or three - one actually had several children and a dog attached - alas!

Fortunately, once we were clear of the pedestrian clutter, we had only two significant hills to climb, before we reached the bridge. The walking/cycling path on the bridge was busy, but not as busy as I knew it could be later in the day or on weekends. In fact, the actual biking itself was not that strenuous, it was all the other flotsam and jetsam that one had to navigate, while keeping the lower part of one's body away from the ill-positioned cage. 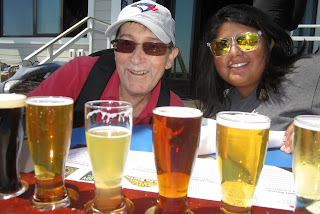 There were, however, stretches of pure bliss over the bridge - well worth all the hassles - and the coasting downhill into Sausalito was epic!!. OK, I was terrified, because it was a very steep hill with a narrow bike path, that was actually just the shoulder of the road, but the cars were few and kind, so I made it in one piece, even if everyone behind had to slow to a crawl :)

More on sunny Sausalito and the return journey later!!

Posted by Carol Tomany at 10:27 AM No comments: