Brilliant is the only word to describe the concept of the "Jameses," - a theatrical event, now on a world tour. It is:

1. A trilogy of three plays about James I, James II and James III, who ruled Scotland during the 1400s. 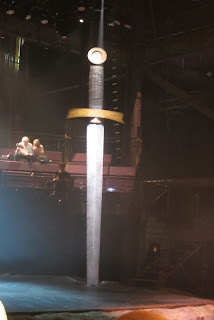 2. An 11-hour epic of amazing theatre - all three plays were meant to be viewed in succession, in one day.

3. Being staged at the decommissioned Hearn generating station near Leslie St. spit - just the perfect place. In it's crumbling state, the Hearn resembles an ancient castle, battered by the forces of time. 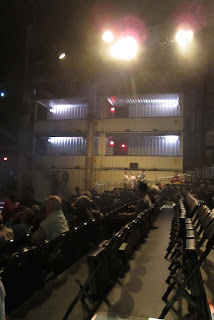 4. Performed by actors from The National Theatre of Scotland, who are amazing.

5. Written by Rona Munro, just prior to the referendum to decide, if Scotland should leave the UK. Plays for times of change - then and now!! 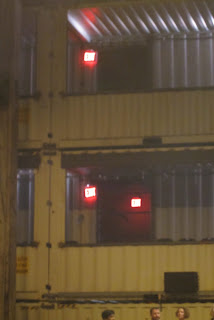 We saw James I last Tuesday evening. It was stunning!! The play fitted perfectly into a theatre, which featured on-stage seating, balconies and galleries made from old shipping containers, a five story ceiling, with supporting walls of poured concrete, and a haunting darkness in the absence of overhead lighting. I was transported.

The only negative was the portable toilettes. Really, when you are paying $100.00 a ticket, you expect something a little better than a dilapidated "Johnny on the Spot."

Still, the experience was worth the inconvenience - Luminato, you rock!!

Have a brilliant day!!
Posted by Carol Tomany at 8:41 AM