Thursday was to be a whale watching day, but it decided to rain the entire day :( We headed East, this time, from La Malbaie and with the help of a ferry, crossed the Saguenay fjord at Tadoussac. This was not a pleasure boat, however, it was an essential link on the only highway connecting the towns along the North side of the St. Lawrence. Apparently, it would cost a billion dollars to build a bridge and obviously, no one has been able to make that happen, as yet. Hence, the traffic just backs up and waits for a ferry or two, or three, as the case maybe.

The line-ups, especially in high season, must be considerable, because there were a few official signs requesting people not to pee in the area. Yes, that's right, bladder build-up happens and what are you supposed to do? We are now faced with the question, if you are not going to build a bridge, will you at least build a toilet or two :) 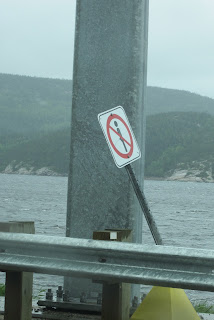 I must apologize for the poor quality of the picture, but it was raining and I really didn't feel like making a scene by rushing out to take a picture. The image is a person, read man, standing sideways with a spout of dots coming from somewhere in his middle, no doubt, a piddle - sorry I couldn't resist the rhyme :)

For those of you who collect unusual road signs, this is a classic. Anyway, someone should have held the sign up to the sky to tell it to stop piddling on us. 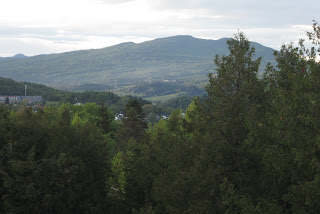 Since the back up of vehicles on the other side of the river was even worse, we decided to return to La Malbaie via a bridge at the top of the fjord in Chicoutimi, albeit a two hour drive away. We were rewarded, though, with an awesome trip along the East shore of the Saguenay - again winding country roads, sometimes with a small river on either side, lots of trees, old mountains, gorgeous scenery and....wait for it....rain. We knew there were hikes along the fjord, but decided not to venture out of the car. Did I mention that the rain also came with an icy wind?

The shock of finding a bustling city, Chicoutimi, at the end of all this wilderness was a nasty surprise. Many apologies to all who live there. I just wasn't expecting strip malls, traffic lights, hustle and bustle after such an idyllic ride. Still, we managed to find our way out of the sprawl and onto another pleasant road back to La Malbaie. In fact, when we finally arrived "home," we had been driving for nine hours and it was still raining!!

Never mind, we were having dinner, that night, in the lovely restaurant attached to the resort. It was a treat and much deserved after a very soggy, grey day.

Have a sunny day!
Posted by Carol Tomany at 7:29 AM