Saturday was the end of our stay in La Malbaie. We left about 10:00am to drive the 2.5 hours back to Quebec city, with stops along the way. We gave Isle aux coudres a miss. It was another short ferry ride and I had already had three ferry rides on this trip.

Ste Anne de Beaupre was a disappointment. The grandness of the shrine was lost in the mile or two of tawdry motels, fast food outlets and tourist shops which flanked the basilica on either side. I realize that visitors need a place to stay, but it looked more like a theme park than a place of worship. Whatever happened to hushed silence and awe!! 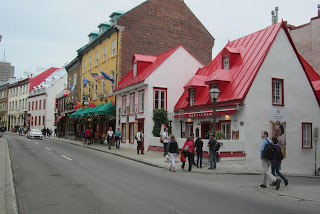 We turned off the road to visit Montmorency Falls, which might have been spectacular, but we really couldn't work out the venue. The parking lot looked more like an industrial after thought and had the nerve to charge $12.00 to park in a muddy rut. From here, you saw the lower end of the falls and could climb to the upper levels, which, I understand, are even more spectacular. Somehow, I thought that this entrance should have had a little more ceremony about it. It needed more of a presence, if the falls were, indeed, as grand as the travel books said they were. 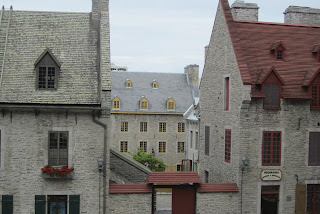 I couldn't blame jet lag for my ennui, but I could blame the weather. It wasn't actually raining, but it was still very cold, windy and alas, threatening rain. We finally decided to visit Ile d'Orleans. It's a rural oasis on an island just a stone's throw from the centre of Quebec city. With its winding roads, whimsical farms, quaint villages, and period houses, it really could be a Disney theme park, but it isn't. It's real and they were selling local strawberries at roadside stands. 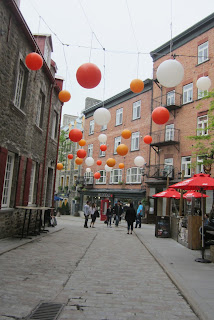 We were thinking of the island as a possible biking trail, but cyclists were given a tiny strip of the road, not a dedicated bike path and the roads were narrow, hilly, at times, and fairly busy. Many brave souls, though, were biking away, in spite of these conditions. It must be something in the French constitution, after all the biggest bike race in the world is in France!!

Fortunately, the evening was warmer. We were able to sit out at our favourite restaurant, Le Lapin Sauté, for - you guessed it - rabbit, in some of its many forms. The air was festive, the weather dry, the wine, good and our hotel close by.

Home tomorrow - have a great day!
Posted by Carol Tomany at 8:14 AM