Who put the "arch" in Architecture?

I think it had to be the Moors. Sometime after 711A.D, the Moors crossed the Straits of Gibraltar from North Africa and conquered Andalusia (southern Spain). Once firmly entrenched, they built their monuments - mosques, palaces, battlements, etc. all supported by graceful arches. Every place we visited - Seville, where we were staying, Cordoba, Granada, Cadiz, Jerez etc. was filled with arched passageways, arched streetscapes, and of course the many arched alcazars. 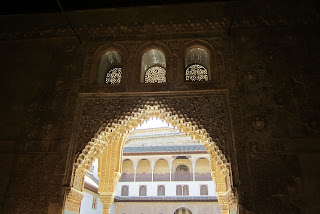 Given the penetration of the Moors in Spain, I am amazed the crusades were able to make the headway they did, over the centuries, eventually driving the saracens back to North Africa by 1492. Today, Christianity is firmly entrenched in Andalusia and all that remains of the ancient Moors is their stunning architecture, their gorgeous orange trees and a certain look in the features of their descendants. 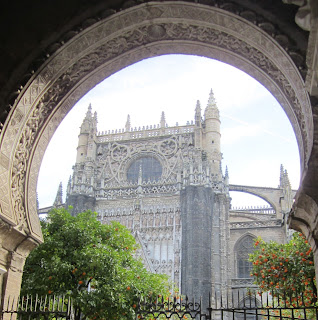 As with many conquerors, the re-established Christians made their mark in Andalusia. They converted the mosques to cathedrals, took over the palaces and generally purged, what they could, of moorish life.  The inherent beauty of the original buildings, however, cast their spell and although most of the mosques were destroyed, their minarets were spared. These ornate structures were converted to bell towers - their use, calling people to prayer, unchanged. 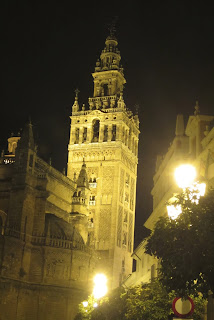 Fortunately, the crusaders kept many of the moorish palaces or alcazars, adapting them for their own use, into castles and fortifications. Although the structures themselves are stunning, their gardens are beyond belief. I was amazed that such an arid climate could support such lush vegetation. Everywhere, there were orange trees, rose gardens, espaliered fruit trees and flowers of every colour, shape and size. Effusive fountains decorated the courtyards and delicate pools of water shimmered in the sun. 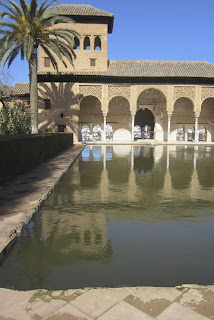 Though the "arch" seems to define the buildings of southern Spain, there are other elements that make the architecture so charming. Earthy pigments of terra cotta and ochre tint the stucco applied to many of the structures, giving them a warm and inviting look. Artistic tile work adds variety to these facades, as well as creating interest in pavements, patios, fountains and even park benches. Plazas are fringed with exotic palms, where colourful flowers bloom, even in winter. Outdoor cafes, street entertainers, horse-drawn carriages and busy markets complete the festive air. 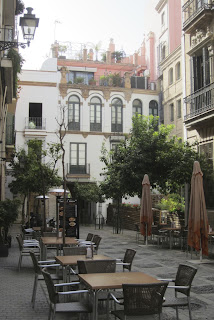 Seville and the other cities of Andalusia are places from another era.  There is an old world grandness about them that comes only with the passage of time and maybe the passage of a conqueror or two.

Have a great day!
Posted by Carol Tomany at 9:04 AM