How did Shrove Tuesday become Mardi Gras or Carnaval in Spain? Traditionally, the Tuesday before Ash Wednesday was the day you went to confess your sins (to be shriven), so that you could do your penance through Lent and resurrect yourself as a faithful Christian by the time Easter arrived.

Perhaps the later Christians thought that, if you had to go to confession anyway, why not make it really worth your while and build up a whole list of sins. After all, you were going to be subjected to forty days of abstinence, physical castigation and mental anguish anyway, so why not feel that you really deserved it!! In fact, why not have a fabulous party the day before Lent. Heck, why not make that a week or even two weeks of partying before you have to give up everything. 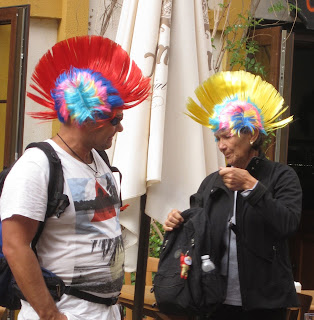 Whatever the reasoning, it created the celebrations the world enjoys today in places like New Orleans, Rio and Cadiz. In fact Cadiz is to Europe what Rio is to the rest of the world. People pour into Cadiz, in the south west corner of Spain every day, for almost two weeks before the beginning of Lent. We were told, that even though bus service had been doubled, we would still have to make a reservation well in advance. As it turned out, this information was for the weekend revellers. On the Monday before the celebrated Tuesday, we easily got a bus, in the morning, for the two hour trip to Cadiz from Seville. 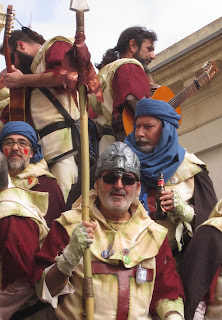 It was a sunny day and very quiet. Perhaps Carnival was over and we had missed it? We did a few tourist "things" - walked around the city, which is surrounded by the sea, walked out to what looked like an old castle, watched fishermen on the rocks, cyclists screaming by and children playing everywhere - don't these kids go to school? Eventually we ended up in the barrio for lunch. This is when we realized that they were still celebrating and the party, for today anyway, had just begun!! 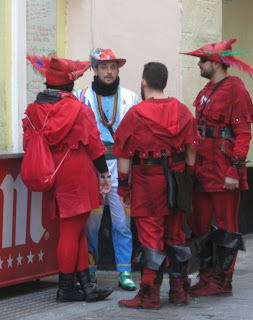 Hundreds of performers, all in costume, sang to the music of guitars and drums, while their floats moved slowly through the crowded streets. Other groups ate and drank, while waiting their turn in the parade or on various stages around the old town. Almost everyone was in costume and almost everyone was either eating the freshly caught raw sea urchins or drinking whatever was in their bottles. 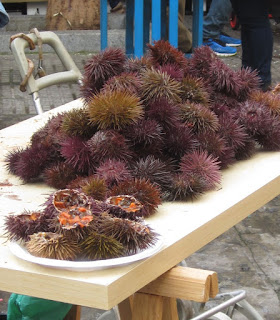 I felt naked with out a wig or a mask, so we bought one mask - to share and took pictures, while we extracted ourselves from the crowds and found the one free table available anywhere for lunch. It was hard to believe that these celebrations had been going on for almost two weeks and there was still a fever pitch to them at 3:00pm on a Monday afternoon. You would need forty days of rest just to recover. 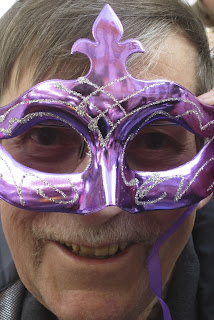 When we boarded our bus to return to quiet old Seville, we noticed the busloads of people arriving for the evening events. Clearly we were just part of the warm up. The real party was barely starting and tomorrow would be the last and perhaps the biggest day.
Posted by Carol Tomany at 8:05 AM