During our month's stay in Seville, we took a number of side trips to other cities in Andalusia, southern Spain. Guide books are helpful in that they point you in the right direction, however, after that, most of your travel experiences can be called serendipitous. Let me explain.

Of course, we had to go to Granada to see the Alhambra. It's a UNESCO world heritage site and a definite "must see." Although we booked our tickets on-line, we had problems printing them from the designated bank machines in Seville, partly because we had paid for them on-line with a North American issued credit card and partly because we had purchased our tickets, as seniors and our ages had to be validated. Believe me, I was thrilled every time I was asked to show my driver's license to prove that I was of a certain age!! 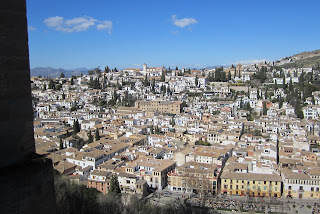 Fortunately, the queue to validate our tickets was short, however, we had to pay another €10.00 because the senior's discount was for European Union seniors only. Apparently, they still feel that North Americans are rich! As our actual booking to see the Alhambra was for the next day, we decided to return to our hotel via a lovely sloped path, bordered by wildflowers and the walls of the ancient fortification - this was worth the extra €10.00. 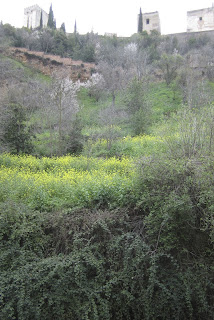 Granada itself was busy. There were lots of buildings, shops, people and traffic. Fortunately, we were surrounded by mountains, the snow covered mountains of the Sierra Nevada. They were our mental escape, from the urban chaos. We managed, though, in spite of the madness, to potter around the city for the rest of the day and since the concierge at our hotel, suggested we go to the top of the hill, opposite the Alhambra for a view of both the sunset and the palace, which was lit up at night, we decided to have dinner up there that evening. He did not mention, however, the 50mph wind and the temperatures bordering 0ºC that we would find at the summit of the Albayzin. Perhaps he hadn't actually been there himself in February. This was not a serendipitous moment. We had hoped to find a restaurant here, but it was too cold to even look at the menus. 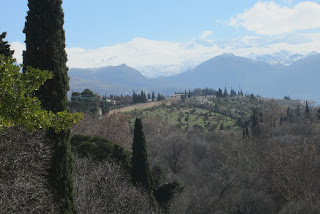 That being said we noticed a large group of people outside of one of the restaurants. "It must be a good one," I said. "Let's see if we can get in." We muscled our way through the group, only to have them disappear almost immediately into an oversized cab. They were actually a large extended family sheltering in the doorway of the restaurant, until their taxi arrived. By then, there was no time to read a menu - an anxious waiter was at the door. "We'd have to take this one on faith," I thought, as he took our reservation, ushered us upstairs and seated us at a table, by the window, with a full view of the Alhambra!! Forget dinner, the meal was before us!! 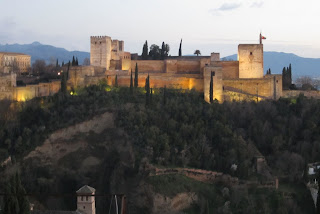 The food, in fact, was delicious, the restaurant was full and we were out of the wind and the cold. Serendipity at it's best!!

Next post, the Alhambra.
Posted by Carol Tomany at 10:13 AM