How much is that rabbit in the window?

In an earlier post, I mentioned that, by the time we were in our third week in Seville, I was ready to eat my way through the food market, we frequented, almost daily. I was itching to do a rabbit stew, a roast of fresh local lamb, and something with pork in any of its various offerings. I would mentally fry a mess of Sand Dabs, steam every mollusk, crustacean and curious sea creature I saw and braise a gorgeous large fresh fish, which would be scaled, trimmed and gutted before my very eyes.

On the other hand, I ruled out organ meat, any stomach or brain offering, and didn't think twice about blood pudding. There were also some curious gelatinous "things" that I passed over because  I was sure they were "acquired tastes." Now, I was tempted by the pigs' trotters, and the chicken feet were free!! 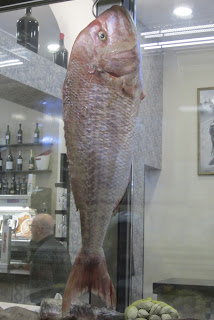 I knew, if I ever returned to Seville, I would have to try every type of red, green and yellow pepper in every shape, size and sizzle. I also knew I had to stew every dried bean and lentil there, adding to them, in a myriad of combinations, every herb or spice available.

Progress, though, comes in baby steps. So by the time we left, we were able to order, confidently, 100 grams of shaved Jambon, a specialty of the region, knowing that it would cost us around €10.00, not €100.00, which it can, if you are not careful. For the first week or two, we ordered the pre-packaged Serrano ham, just to be safe. I also wanted to learn enough Spanish to find out what they did with the ham bone, when they had finished shaving off all the meat. I saw a delicious bean soup in the making. 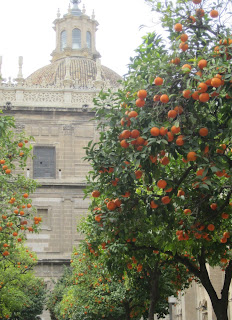 We had also eaten our way through five or six local cheeses, become addicted to the sweet Spanish onions, which you could buy in manageable sizes, bought several varieties of oranges and kilos of fresitas - small sweet strawberries. Even though the streets of Seville are lined with orange trees, these oranges are quite bitter and only suitable for English palates, in the form of marmalade. Go figure! I did, however, covet a jar of jam from blood oranges which I saw in a stall that made fresh pasta. Maybe it was a sort of Spanish-Italian fusion :)

Fortunately our apartment had an oven, many don't. We were blessed with three sizes of frying pans, the largest of which had a lid and various pots, steamers, and sieves. We had a set of great kitchen knives, enough cutlery for the Spanish army and a limited supply of bowls, plates and saucers, all of which were chipped! Why they decided to install just one electrical outlet in the entire kitchen and then expect anyone to use 1. a microwave, 2. a coffee maker, 3. a toaster, and 4. an electric kettle is beyond me. We managed though and were able to cook some great meals - better, I might add, than we had in most of the restaurants. More on this later.

Have great day
Posted by Carol Tomany at 2:01 PM