Do you speak English?

Never let the inability to speak a language interfere with your travel plans. Although, my husband and I do not speak Spanish, we blithely set off for a month's stay in Seville, Spain. Even though we had worked through a few on-line language programs before we went, somehow, we never managed to learn the phrases that we needed, when we needed them, if you know what I mean. We also managed to purchase a phrase book that was extremely limited. You could, for example, look up the English word and have it translated into Spanish, but there wasn't a section for Spanish words translated into English, except for the chapter on restaurants. 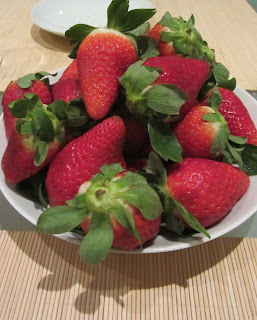 However, with the help of a few words here and there, a lot of sign language and some very kind people, we got to being quite conversant by the time we left. In fact, I had a Eureka moment about three weeks after arriving. I was in a fairly busy department store, when I noticed an elderly man, walking with two canes and having great difficulty in the crowd. He was asking a shop girl for the elevator or lift. No one seemed to understand him and he was obviously very frustrated. Fortunately, I had remembered, from Madrid, that "ascensor" meant elevator. When I said to the sale's assistant, "ascensor," she understood immediately. It was an elevating moment :)

There were less inspiring moments, however, especially at the market. Seville still has several daily markets and since we were cooking at home most of the time, we went to the market almost every other day - partly for food, of course and partly just to salivate. Every traveller has a particular passion and we happen to love food markets!! We were well into our second week, before we learned that "medio" meant half. I didn't mind the kilo of fresh strawberries that we bought the first week, but we were still finishing off the kilo of broad beans the week we left. 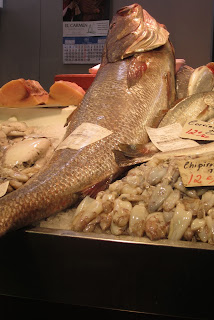 For the most part the vegetables and meats were recognizable and easy to order by pointing and saying, "dos" - two or "quatro" - four. It was when the total amount was rattled off for payment that we stumbled. Most stall keepers simply handed us the bill and we worked out the payment and when we couldn't even get the money right, they were very honest. They took our money and worked it out for us!

Eating out was easier of course. All the menus were in at least two languages and some were in four or eight. The translations were often strange, however, and we were soon asking for both Spanish and English menus to verify the translation of the English, because buttered Hake could show up in English, on a menu, as battered hake, however you were not going to get English fish and chips. 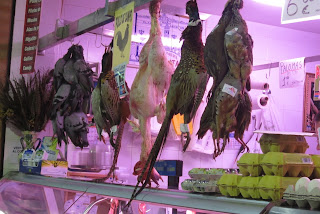 Needless to say, the more we learned, the more adventurous we became! By the end of our stay, I was itching to buy rabbit, without its furry coat, and make a stew. We did buy four whole, small Sole, ungutted, which we fried in butter - delicious! I was not ready to do Pigeon, even if they had taken all the feathers off, but I was ready to try a mess of Sand Dab, once we were able to figure out what they were.