To visit the Camargue, that huge delta of the Rhone river which stretches ever further into the Mediterranean, has always been on my hit list. It's not just because there is a Rolls Royce named after it, but it is also because, many years ago I "missed it," while hitch hiking through the south of France. In fact, I hadn't even given it a second thought, as we hopped a ride from Arles to Frejus.

It was at the youth hostel that evening, when someone said, "What, you missed the wild horses of the Camargue!" that a fantasy was born! I dreamed of those wild horses for decades. I likened them to the wild mustangs on the plains of the US. I saw them galloping majestically over wide open stretches of sand and dunes. To me they were unfettered, unbranded and free. I was now going to live my dream. 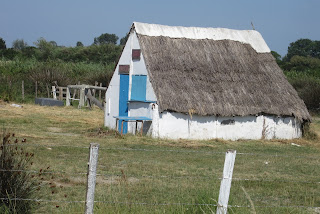 My husband and I booked a safari tour with a small company in an even smaller Jeep to spend a morning touring the Camargue, looking for wild horses, black bulls and pink flamingoes. Fortunately, there was just one other couple on the tour with us or the Jeep would have seemed very cramped. Also, fortunately, our guide, Sandrine, could speak fairly fluent English, as could the other couple, because our French is virtually non-existent.

Sandrine, who was born in the Camargue, was also a safari leader in Kenya during the winter. We were in good hands. Now, for the reality. It started with the spiffy new highway that runs from Arles to Stes Maries de La Mer at the bottom of the delta. Where were the quaint dirt roads of my dreams?Even though we took side roads most of the time, there was still a strong presence of civilization in the form of co-op farms, small inns and various commercial enterprises. My wilderness evaporated almost immediately. 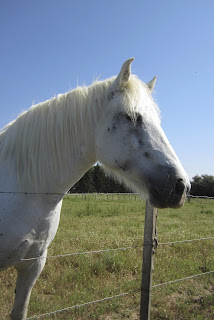 The horses as it turned out, although wild in the sense that they are never under cover, are fenced, owned by land owners and even branded. They are docile, almost sad, creatures, who stand in small enclosures most of their lives. Yes, some are trained for a spectator sport that involves a bull and pom poms, but the rest are used as training horses for children to ride. Sigh!

We did see the bulls, who were also fenced. We learned the difference between the provencal bull, which is bred for the Course Camarguise competitions and the Spanish bulls, which are bred for the traditional Spanish bull fights, still held in Arles. It was a lovely informative ride, but it wasn't wilderness. 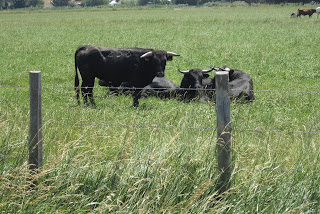 Sts. Marie de Mer, is a Spring gathering place for gypsies from all over Europe, who come to visit the shrine of St. Sarah, a patron saint. It is also full of tourists and those tacky tourists shops. Commercialism aside, though, there are still lots of charming guest houses, a bustling market and long white beaches, fringed with pods of pink flamingoes. I could have stayed longer. However, we were on a schedule - alas, time always intrudes on the dreamer! Sandrine took us through more of the flamingo marshes on our way back. This was probably the highlight of the trip. 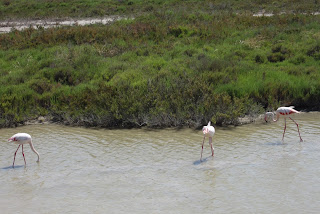 Wild horses aside, there is still much to see in the Camargue. In fact, it's an interesting biking venue, although the back roads can be rough with large potholes and little gravel to cushion the impact. However, you do get a chance to come face to face with the denizens of the area, ride the long stretches of beach and dike and spend more time in some ancient towns. You may even hear the old language of Provence spoken by the few remaining elders of the area.

In reality, it's still a lovely place, it just wasn't the wild, untamed pampas of my imagination, but then, really, what ever is.

Have a great day!
Posted by Carol Tomany at 9:31 AM