Unfortunately holidays come to an end - a necessary evil. For as Shakespeare said -

If all the year were playing holidays,
To sport would be as tedious as to work;

I never want my "sport," vacationing, to become tedious work, so I have holidays that end. However, you can ease the pain, by having an interim or cool down period, where there is still a little mini holiday before you actually have to go home. This is why we often book a return flight mid-week, because we get a few extra days after the full week or more of solid vacation time, to do a little bit extra. Last year, after we left Cannes, we spent three delightful days in Aix-en-Provence. This year we decided to go to Arles, for a few days before flying home. 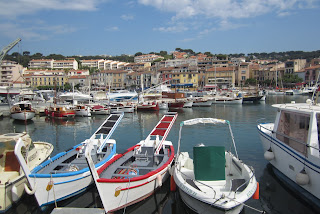 Saturday was our "check out time" from the apartment we had rented for a week through Home Away. We agreed to meet Victor, our contact, about 10:30am. He would check out the place, make sure there was no damage and return our security deposit - yeah!! Victor is not a walker, so he was surprised that we were walking, with luggage, to the bus stop in Cassis. "It's a good twenty minute walk," he said. We didn't tell him about our many extended walks in the area - no need to brag :) We thanked Victor for his hospitality and set out for Arles on public transit.

First, we took the bus from Cassis to the station, where we waited about thirty minutes for the train to Marseilles. Fortunately "people watching" is a hobby of mine and thirty minutes is ample time to observe the comings and goings of people, spending idle time waiting for a train. What is it about travel that brings out the "crazy" in people. First, there were the three women across the tracks singing in the echo of their waiting area, maybe performers practising. Or the family with six children who were allowed to wander at will, maybe they hoped to lose a few along the way :) Finally, I couldn't help noticing the young men and the old men, always on their own, while rotund women clubbed together, complaining about the lost time. Philosophy in motion. 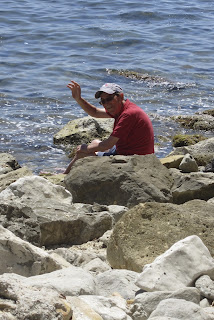 Boarding trains is always a challenge, for someone with short legs. There were two levels to the platform - one for the newer trains with lower boarding ramps and one for the older trains that would require a giant step up and forward to board, or in our case, fall into the train. I prayed for a new train and took my place on the raised platform. Not only did a new train arrive, albeit a little delayed, but a kind young man offered to lift my bag onto the train for me - never dismiss the usefulness of a few wrinkles and a little grey hair :)

From Cassis to the outskirts of Marseilles was a pretty ride, with glimpses of the mountains and sea. Unfortunately, the ride through the urban sprawl wasn't nearly as nice, so I concentrated on the fact that I was hungry and hoped that the station in Marseilles was near the restored port area, where we might find an interesting restaurant for lunch. Not so. It was at best a taxi ride away and there was a train, almost on the next platform, ready to leave for Arles in ten minutes. My husband wasn't stopping for lunch, so, I guess, I wasn't either. 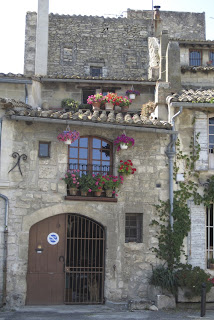 West from Marseilles is an industrial wasteland with huge docks, refineries, factories and all the seediness that accompanies a port city. Necessary for commerce, but an eyesore on vacation. Closer to Arles the land soften and vineyards appeared, always a good sign. Not all the stops along the way were noted on the train's itinerary. So we had to think quickly and guess accurately, because those that hesitate will be left on board, when the whistle blows. "Ici Arles" stood me in good stead. It was answered with a nod by a pretty woman restraining a massive dog, who was eyeing my leg. The very leg that I needed to step off the train and onto the platform with. Transitions complete, we took a taxi to our "boutique" hotel hidden in the walls of the old town. We would never have found it on foot and on an empty stomach to boot, or something like that :)