Midway through our week in Cassis, we decided to inquire about tickets to Arles. We had to vacate our apartment on the Saturday and planned to stay for a few days in Arles, before catching our flight home on the following Tuesday.

Normally we would just walk to the train station. However, the station in Cassis was a few kilometres away and the weather had become very hot. I don't mind the heat near the sea or on a shaded walk, but this would be a trek near busy roads with lots of buildings. We decided to take the bus and I am so glad we did. The trip gave us a perspective into the lives of the locals. 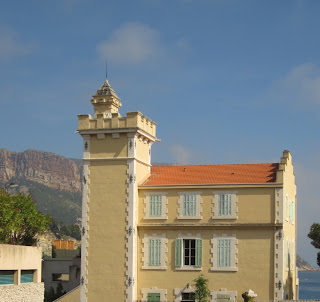 First we got to meet the bus driver, a young man, who obviously loved his job. He smiled and chatted with everyone, as we boarded. We noticed too that someone always sat in the front seat opposite the driver, to talk with him as he drove the route. Listening to their conversation, was a good way to improve my French.

The bus route, though long and circuitous, gave us a great tour of the area beyond Cassis. Farms and vineyards spread out behind the low rise apartment blocks. Banks of Oleander screened the less attractive commercial buildings and the road always curved up, down and around, making the drive quite scenic. At the train station, we were able to buy tickets to Arles, which could be used anytime on Saturday. Great, we could leave, when we wanted to!! 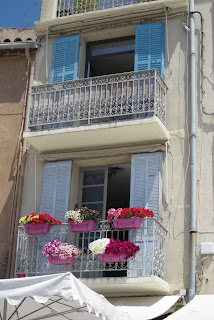 The bus timed its arrival at the station to meet the next train, so our trip back to Cassis was crowded with people going to the beach. I was particularly taken with a German family, who were travelling with four young children. There were bags, strollers, baguettes, and children, everywhere. This is when you need a vacation from your vacation!! The people, who came on and got of the bus, were always greeted by the smiling driver. They immediately smiled back, as did the rest of us. In fact one passenger decided that this should be called, "the Happy Bus." We would never have had this experience in a car. Yes, you would have on a tour bus, but that is expected. This trip was just the daily slog for some, made so much better by a friendly driver!!

The pictures? random shots around Cassis.

Have a great day!
Posted by Carol Tomany at 9:58 AM