We decided to spend a week in Cassis on a whim. Actually a friend had given us a calendar by an artist who painted beautiful pictures of places in France and Italy. Cassis was one of the prettiest. I decided that it might be a nice place to spend some time based entirely on an artist's interpretation. I have said before that serendipity is my co-pilot. 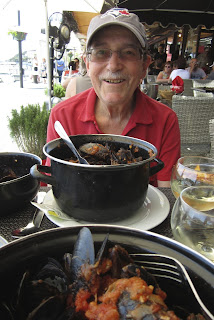 1. It bordered on a national park - Les Calanques, which has some beautiful walking trails overlooking the sea.

2. It was in a wine area, with several wineries within walking distance of the town.

3. It offered great accommodation options on Home Away. We booked an apartment with a view of the marina, the open sea, the castle and two of the Calanques.

4. There were dozens of great restaurants.

5. Shopping was mixed. There were very upscale stores from Paris located beside a few affordable local shops. 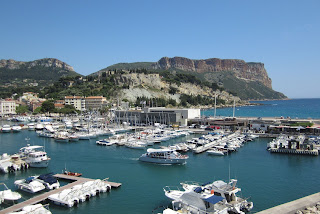 As I have said before, we are not of the "must see everything in one trip" sort of people. We prefer to settle into a place and stay for a while. I could have stayed for months. We ruled out going back in winter for a while, though, when we found out that it could be lower than 10ºC with a fierce wind in January and February. 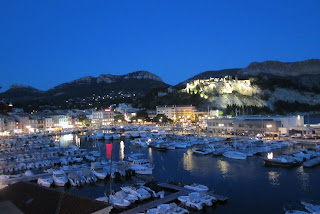 Still in June it was warm and sunny. There were mussel dishes of every description on the menus of most restaurants, as well as, other local sea food and duck. If you planned to cook at home, the fisherfolk came in each morning with their catches - eels, when available, were snapped up pretty quickly. We ate in twice. In both cases we bought prepared food - quiche one night and a charcuterie of pates, meats, baguette and cheese another night. Ymmmm. The wine was always local and usually Rose´- very trendy here.

We, of course, had to do a lot of walking to work off the calories. More on the walks next post.

Have a great day!
Posted by Carol Tomany at 8:01 AM