Somehow, I have always felt that there is a conspiracy between hotel clerks, taxi drivers, restaurateurs and tour guides. When we checked into our hotel on Friday night, we asked when the shuttle train to the airport left in the morning. Our hotel clerk immediately said that the train was not running on Saturday because of repairs, but he could call us a cab. Hmmm, that of course meant a much more expensive ride to the airport. It was a little late to check out his story, so we reluctantly accepted his offer to arrange for a cab at 7:00am the next day.

We had by now, become quite comfortable with our boarding passes on our phones, however, we still preferred to check in our luggage rather than taking it on the plane with us. Behold! self check in. Soon the world will peopled by robots :) What we faced at the airport in Amsterdam was a huge bank of "cupboards," that opened for you to insert your luggage and print your luggage tags. There was, however, a glitch. Not all of the scanners on the respective cupboards could read a boarding pass on a phone. An attendant still had to take our phones, print out our boarding passes and then insert them in the slot for our robotic cupboard to read, weight and process our luggage. Sigh! 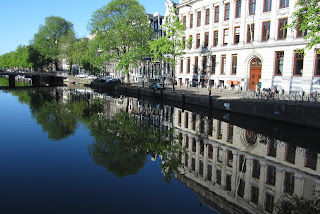 I think that I have to try and pare my belongings down to a backpack and start taking everything on board or begin relying on the kindness of strangers. Yes, our cases are small enough to take on board, however, we too are small and lifting a somewhat heavy case into an overhead bin, is no small feat for anyone barely 5 feet tall - all puns intended :)

Anyway, enough of airports and transfers. Our flight to Marseilles was short and sweet. We left very cool weather in Holland - 13ºC and arrived to 23ºC in the south of France, even sweeter. We didn't, however, attempt to take the train from Marseilles airport to Cassis, our final destination. This would have involved a shuttle into Marseilles, a bus to another terminal, a train to Cassis and then another bus into the centre of town. We actually had our contact in Cassis book a taxi for us. So it was that we walked out of the terminal right into a handsome 6 foot stranger holding a sign with our last name on it - we knew we were home!! 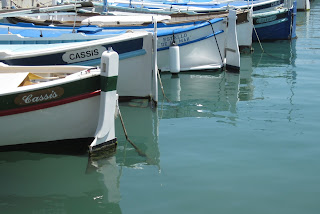 Taxi fares aren't cheap, but it does ease the pain, if the drivers are entertaining. Justin gave us a cook's tour with a pretty good English commentary. As we had been told the fare in advance, we knew we weren't going to be charged more. Justin even refused a tip at the end!! Yes, we might have gotten a cheaper fare, if we hadn't pre-booked, but we could also have been ripped off, as we had been last year from Aix en Provence to Marseilles. More on that later!!

The pictures? Random shots by water - love them!

Have a great day!
Posted by Carol Tomany at 2:19 PM