Oudewater and the outer limits....

We had cycled to Haastrecht on a bike path that ran parallel to a busy road. No doubt our GPS, had it been working, would have taken us along a pretty country lane that also ran parallel to the road but far enough away that you barely saw or heard the cars. Sigh! Anyway, as we were leaving Haastrecht, we noticed a weathered sign post, with several names on it, including Oudewater, our next stop, how fortunate, a country road from one village to the next. 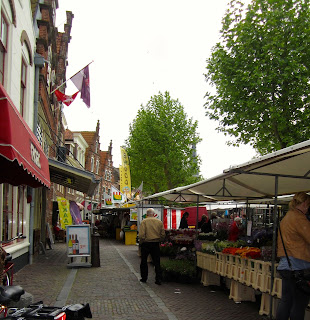 Country roads accommodate both bikes and cars. Some roads are so narrow, in fact, that two cars cannot pass each other. Technically a bike and a car can pass each other, but unless you have nerves of steel, you may just want to dismount and let the bigger vehicle pass first!! Fortunately, I didn't have to get off my bike too often for cars. We did, though, have to get off every once in a while to figure out where on the planet, we actually were - always a challenge!! However, once we got used to coordinating the map, we had purchased, with the sketchy computer printout we had downloaded before we left Canada, we stopped less often.

Fewer stops, unfortunately means, fewer pictures, sigh! Now I know why some bikers wear a webcam stuck to their helmets. You can record the entire journey without a stop, however, you do end up looking a bit like an alien most of the time :) Speaking of aliens and "funny" looks, we did notice some curious stares from time to time, no doubt because we were actually wearing helmets. Most Dutch cyclists rarely, if ever, wear a helmet and since we didn't look like Tour de France racing material, people must have wondered why we bothered with a hard hat, at all. It's the difference between coming from a North American country, where cyclist too often become roadkill, to biking in a country where cyclists are protected and respected. 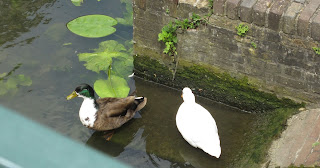 There was a market on in Oudewater, when we arrived - what fun!! So much fun, in fact, that we decided to stay for lunch. In spite of the crowds, we found a lovely table outside next to a canal. Here we could watch the street theatre, pedestrians, cyclists, delivery vans, etc., while we wrote their scripts. I loved the couple, whom I presumed were North American. There are subtle differences between Europeans and North Americans! They were on bikes with panniers front and back. I decided that they must have been travelling from village to village toting their gear with them. From the pained look on their faces, I guessed that the journey today might have been a tough one. A group of seventy to eighty year olds were wiser. They had battery assisted bikes. 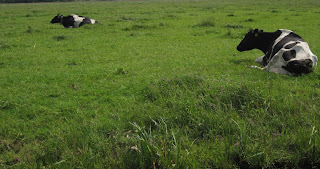 Once more on our vehicles, we peddled through farmland edged with small canals. Here ducks nested, cattle grazed and flowers fluttered in the breezes - a netherworld in The Netherlands.