On a high in Amsterdam...

In Amsterdam, you really don't have to go to the "pot" cafes, where smoking marijuana is legal, you just have to inhale. OK, it was Saturday night on a long weekend. People were here to party, weren't they? However, I got the distinct impression that smoking weed was like drinking coffee. It was there to get you through, on a daily basis!!


Considered the most liberal city in the world, Amsterdam has made a lot of taboos legal. The most dramatic of which is prostitution. When making our itinerary, we decided that we would not go to the "redlight district" in the old town. I just couldn't be entertained by something I find very sad. Yes, it is the oldest profession and ignoring it won't make it go away. Again, it is sensible to monitor prostitution for everyone's sake, but to use it as theatre - there is even a candlelight tour - is to mock those, who must use it as a means of income. 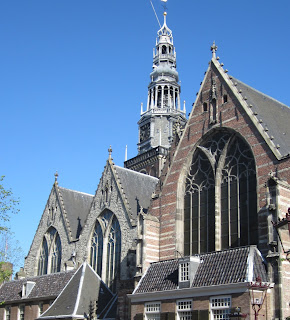 Hence, we moved onto the next item, Oude Kerk, the old church, which is in fact, the oldest building in Amsterdam. Built in the 1300's, it had to be seen and heard. It has a magnificent carillon of copper bells, which like many of the churches in Amsterdam, rings out every quarter of an hour. However, little did we realize that this religious structure formed the centre of the red-light district!! How did this happen? By chance or by design, Oude Kerk was bounded on all sides by the boudoirs of the "ladies of the night." Ironically, this was Sunday morning about 10:00am. Still, many were open for business, while the church was closed. 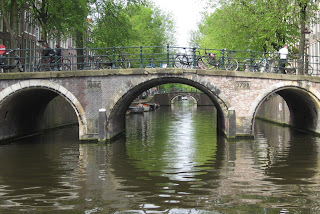 Moving on, we headed to a popular pancake house for lunch. Simply called The Pancake House, it served crepes in every imaginable combination all day. These are European pancakes, thin, large and filled with either sweet or savoury. I chose a savoury one with tomatoes, bacon, cheese and basil. Half way through, though, I realized I should have ordered the one filled with bananas soaked in cognac, sigh! The coffee, however, was very good - hot, strong and tasty. 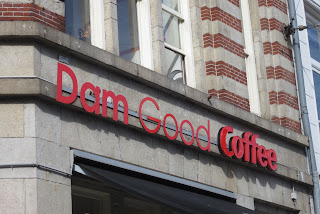