Is that Moordrecht or Mordor?

Although Holland is technically a flat country, there are head winds. As one cyclist put it, "In a country that builds windmills, you have to figure there is going to be wind." So it was that we peddled back to Gouda into a driving force that kept pushing us back from whence we had come!  Add to the journey, bike paths along dikes that had a 20 metre drop on either side to the farms below. I preferred the paths that just dropped off on one side and had the rest of the farm - orchards, sheep etc raised about two or three metres above you on the other side - very surreal.

Our first day out biking can be summed up in one word "adventurous." Given that we managed only 20kms on our first day, we decided to skip the 40kms ride scheduled for the next day and do our day 3 ride as our day 2 ride - does this make sense? The next day threatened rain, however, we know from other biking adventures that we can bike in the rain, not happily, but there you are. Using our maps and eschewing the GPS, we set out for Moordrecht. Again the exit from Gouda was awkward. Yes, we were on bike paths, but there was traffic on the road beside us and there were stop lights and other cyclists and pedestrians etc, etc. We also had to cycle through an industrial area, which wasn't pleasant. 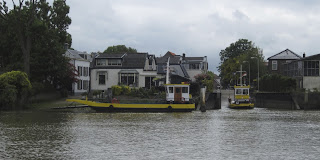 Once we had extracted ourselves from all the overpasses and underpasses, it, of course, started to rain. In fact, it started to pour. We stopped for shelter under a large tree and waited. Fortune, at this point, decided to send us a little perk. She arrived in the form of a woman in her late 70s, on a bike naturally, and smiling. Somehow, she didn't mind the rain and was only stopping to put on a raincoat. We exchanged pleasantries. "Oh, you're English," she said. "It's raining cats and dogs. I learned that in school." Somehow she welcomed the fact that she could practise her English, even in the pouring rain, well, go figure :) She mentioned that yesterday, was lovely and she had cycled with a group to Rotterdam, about 25kms away. I made a mental note to do more cycling when I got back to Canada.

The rain eased. The lady left for Gouda and we headed to Moordrecht. Again we ended up in a subdivision and had to ask directions to the centre of town. Even under leaden skies, as they say, the town was pretty. We stopped at the first cafe we found for a coffee and a re-group. Did we really want to cycle further away from Gouda, in the rain, the cold and the confusion of an industrial wasteland? No, we did not. 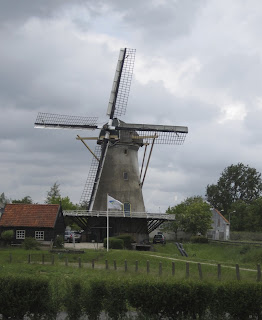 I decided that we could cycle from here back to Haastrecht, which was only about 7kms away. There was method in my madness. Haastrecht had two great restaurants and when we had stopped there the day before, our waitress had asked us if we wanted apple pie. Dutch apple pie, how could I have forgotten, is a real treat. It was too early in the morning to have had it yesterday, but today was another story!! We now had a plan to escape from Moordrecht, which my husband had taken to calling "Mordor."

Our hostess at the cafe, pointed out that we could get to Haastrecht, but we had to cross the river first. Conveniently there was a small ferry which shuttled cars, bikes and passengers across the river for a mere $1.50 each. It was sunny yellow in colour, even if the day wasn't. Our ride to lunch was uneventful, except for the windmill!!  We had seen a few windmills in Holland, but they were either too far away or cramped behind housing developments. This one was a gem. By the time we reached Haastrecht, the skies had cleared, we sat outside where it was warm and sunny and feasted on open-faced sandwiches and Dutch apple pie!! 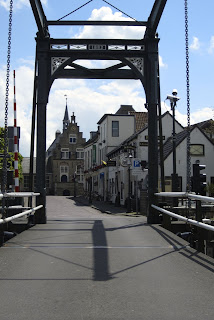 We knew that we were only about 7kms from Gouda and we knew that we could get back there via a country road, so we could relax. I love adventures, but I also love a safety net. Booking with Holland Bike Tours gave us an emergency phone number, should we have run into any real difficulties. We hadn't so far and tomorrow was our last day and we knew exactly where we were going!!