GPS and how to get lost very quickly...

Our train left for Gouda from Utrecht at precisely the time our tickets said it would. There's something to be said about northern Europe's stoic adherence to the mechanics that make things work. There is no throwing up of hands, when trains do not arrive on time - Paris, cursing coach doors that won't close - Rome, conductors that never appear - France, cancelled trains without notice - Italy. No, there is just a certain calm in the knowledge that everything is in order and working according to plan. 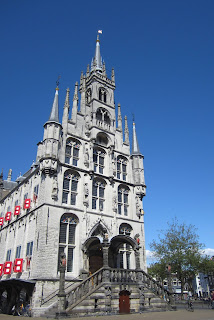 So it was that we arrived in Gouda, on time. We walked to our accommodation, a quaint inn near the centre of town, in about fifteen minutes. Hotel De Utrechtsche Dom is a lovely place with a walled garden, bright breakfast area and small but tidy rooms with private baths - a delightful spot to start and end a day of cycling. We had planned three day trips out from Gouda, through a tour group, Holland Bike Tours. They had set the itinerary to various small villages in the area and we were to follow their GPS instructions. Since our cycling wouldn't start until tomorrow, we spent the rest of the day strolling around Gouda, a very pretty town with some lovely old buildings, a canal, lots of cheese shops and a plethora of restaurants and cafes. 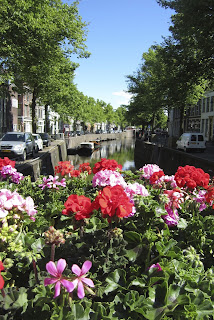 Dinner that evening was uneventful, I seem to remember asparagus in season, local lamb and a delicious desert. I'm not sure that we began drinking Rose wine here, but it seems to be all the rage in Europe, so it might have been. 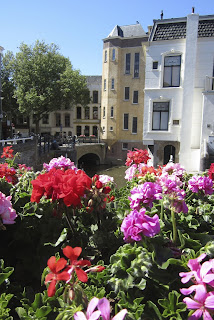 The next day a representative from Holland Bike Tours arrived to give us the bikes we had rented, sign some contracts and explain the GPS system that would obviate our need for maps. The bikes were new, very sturdy, with gears, brakes and panniers - no problems so far. The GPS seemed straightforward enough. Although we don't use a GPS system at home, we did use one once when we did a house exchange in Scotland and exchanged cars as well - their car had one. 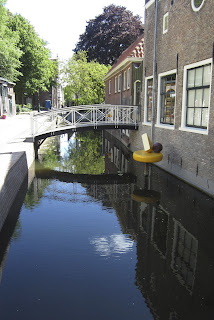 After convincing our outfitter that we understood the mechanics of the GPS and would have no problem, he left.  We got on our bikes and headed out. Apparently, though, the GPS didn't like the direction the agent pointed us in (in which the agent pointed us) and told us to turn around, we did. Peddling a few yards in another direction, it told us to turn around again, sigh! After we finally got going along a quiet road with canals on either side, the GPS started giving us conflicting directions, and we ended up in a subdivision!!  At that point we biked back into town, bought a map, ditched the GPS, and headed out to a place called Haastrecht!! 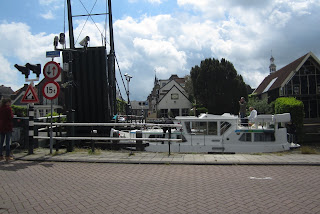 Although this very pretty village was only about seven kilometres away, we were exhausted by the time we got there. That frustrating hour or so fiddling with our non-functioning GPS in Gouda, obviously sapped a lot of our energy. It was now time for a much needed coffee break. We cycled through Haastrecht's main street, which actually wound up one of the few hills in that part of Holland and found a sunny cafe, beside a canal, with a drawbridge. Actually the bridge opened several times, while we were there to let pleasure craft through. Many of these boats had living quarters below deck, as well as bikes for day trips off the boat. I made a mental note to explore the possibility of boating and biking in Holland another time.