On our last day in Amsterdam we went to the Van Gogh Museum. Although Vincent was born in Holland, he did most of his painting in the south of France. His brother, on the other hand, remained in The Netherlands, attempting to sell the artist's paintings there. Perhaps this is why the museum has such an extensive collection.

We booked online for our tickets - remember this - because you get VIP treatment, when you arrive. By 10:00am the lineup to get into the museum was huge. However, we simply walked up to the front door, stood beside the sign that said ticket holders and were admitted right then and there!! We don't go to a lot of museums, so we skipped the one that held the Rembrandts and a few other "must see" places, including Anne Frank's House. I had been to her house about 40 years ago, when it was still a nondescript building on a nondescript street and much closer to the original feeling of disappearing into the walls to avoid the Nazis. Today it is a gaudy spectacle with a glass entrance and another massive line-up.

Although you couldn't take pictures in the museum, there was a designated "selfie" area under a large self-portrait of the artist - a savvy bit of marketing, when you realize that every picture taken beside Vincent was going to be distributed to thousands with a single click!!

We picked up a small gift for our eldest at the museum - a key chain of the artist's ear. Well, someone at least, had a sense of humour about it all. Our son, the artist in the family, has watched every horror movie every made. He loved it. I had a choice of green, purple or red - red of course!! He has now taken a picture of the ear and sent it to all his horror-loving friends. 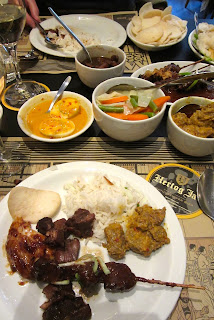 Our "last supper" in Amsterdam was the classic "rijstafel" or rice table. The Dutch rivalled both the English and the Spanish when it came to colonizing the rest of the world, often bringing back the traditions of these conquered countries. The rijstafel comes from Indonesia and it's delicious. Our guide book suggested a good restaurant, which lived up to its reputation. In fact, they were fully booked on a Sunday night, when we first planned to go. We booked on the spot for the next night. I wasn't going to miss a sumptuous meal of spicy sauces, roasted meats, rice crackers, banana fritters and much, much more, all laid out on a myriad of plates in front of you!!

Tomorrow - Gouda, the town that named the cheese and a little cycling - wheels of a different sort!!
Posted by Carol Tomany at 7:39 AM