At the risk of posting twice in close succession about poetry (I could lose the few readers I have), I feel that I have to give you (and me) a little more Mary Oliver.
These are excerpts of simple poems that say so much. 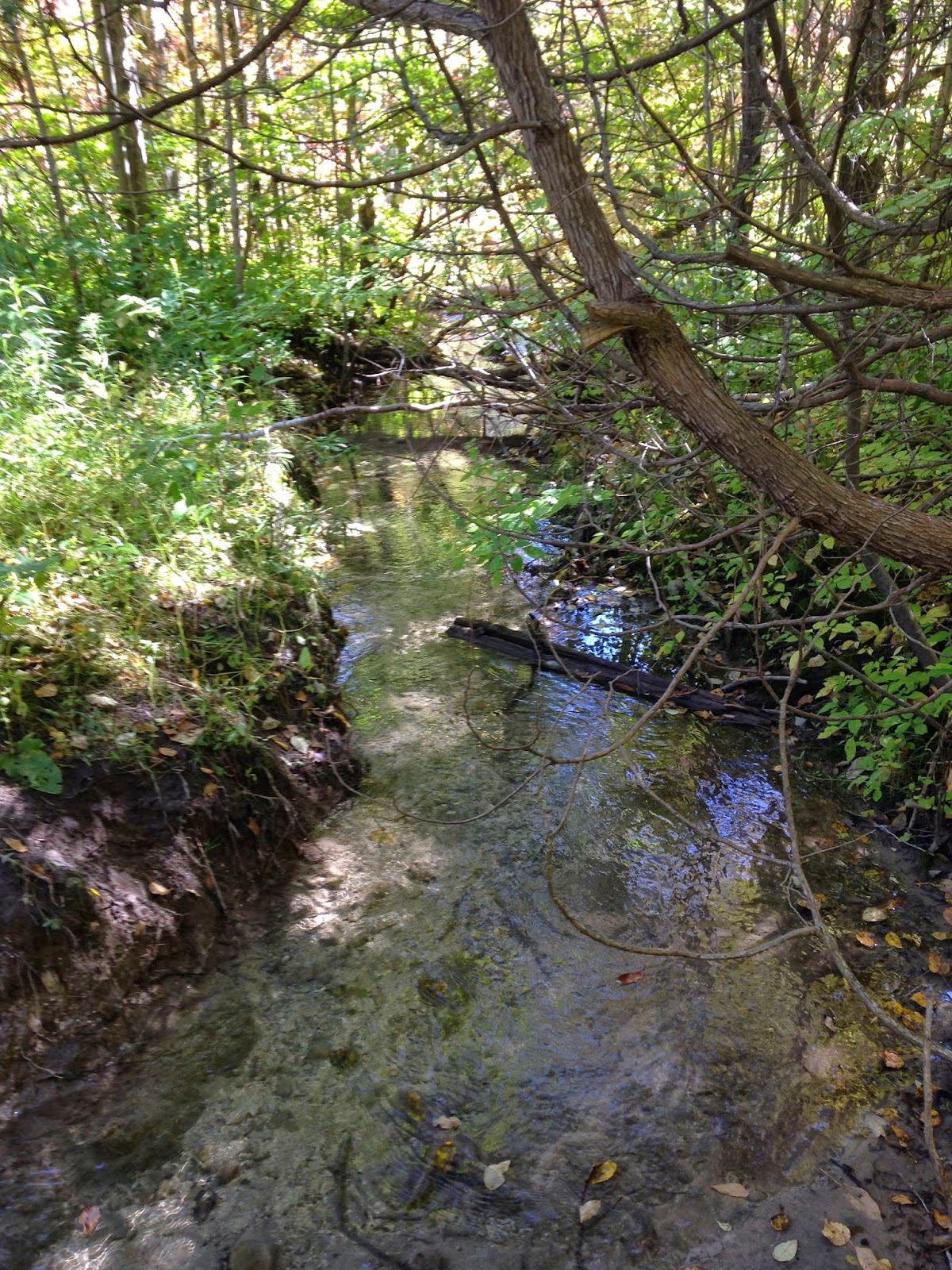 and from "The Summer Day"
I don't know exactly what a prayer is.
I do know how to pay attention, how to fall down
into the grass, how to kneel down in the grass,
how to be idle and blessed, how to stroll through the fields,
which is what I have been doing all day.
Tell me, what else should I have done?
Doesn't everything die at last, and too soon?
Tell me, what is it you plan to do
With your one wild and precious life? 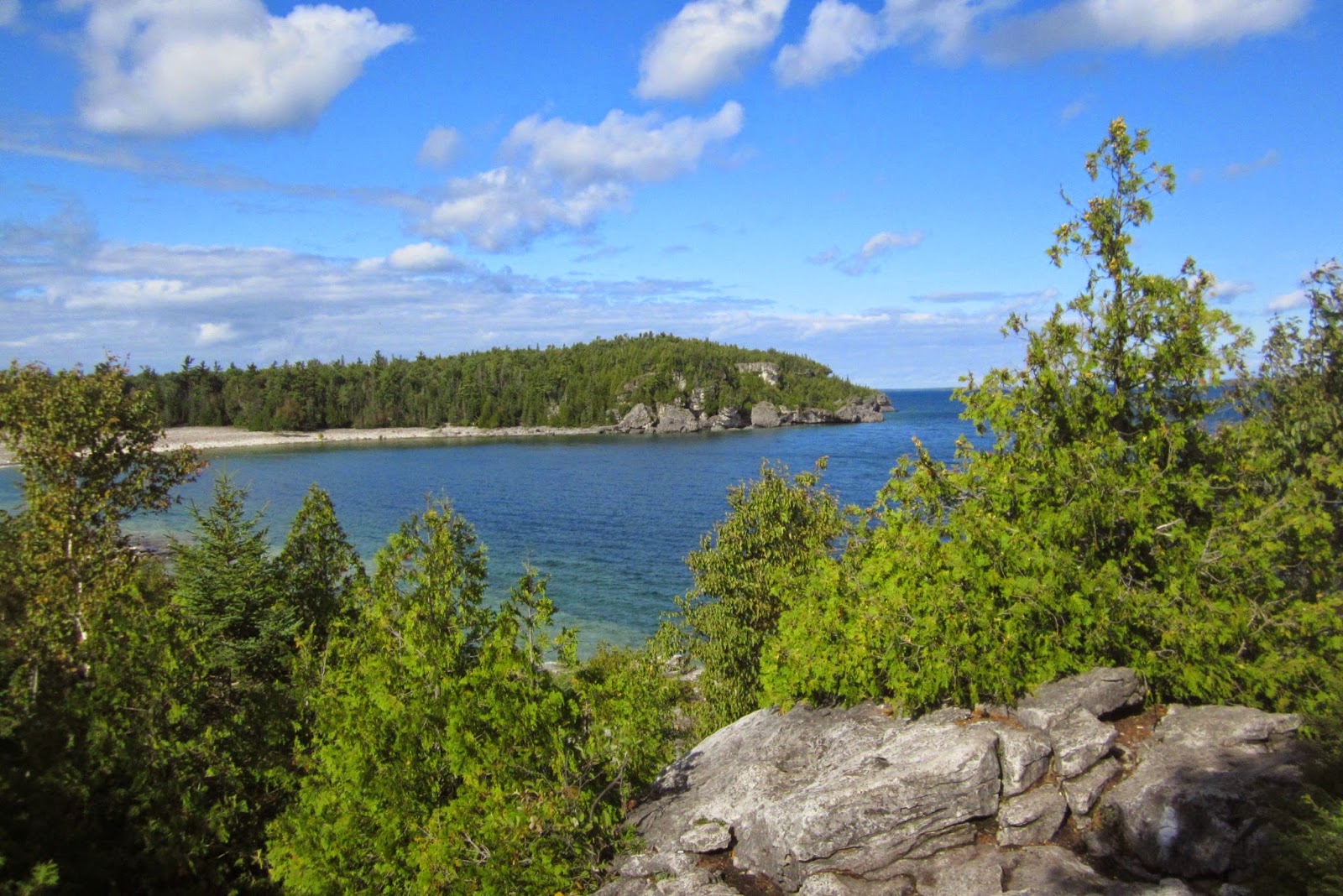 I have been thinking of the last two lines a lot today. I know that I won't be a through hiker on many of the extended trails I read and write about, because I crave creature comforts and good food at the end of the day. However, I would love to experience once, just once before everything is said and done, the following - from Sleeping In The Forest

I thought the earth remembered me, she
took me back so tenderly, arranging
her dark skirts, her pockets
full of lichens and seeds. I slept
as never before, a stone
on the riverbed, nothing
between me and the white fire of the stars
but my thoughts, and they floated
light as moths among the branches
of the perfect trees. All night
I heard the small kingdoms breathing
around me, the insects, and the birds
who do their work in the darkness. All night
I rose and fell, as if in water, grappling
with a luminous doom. By morning
I had vanished at least a dozen times
into something better. 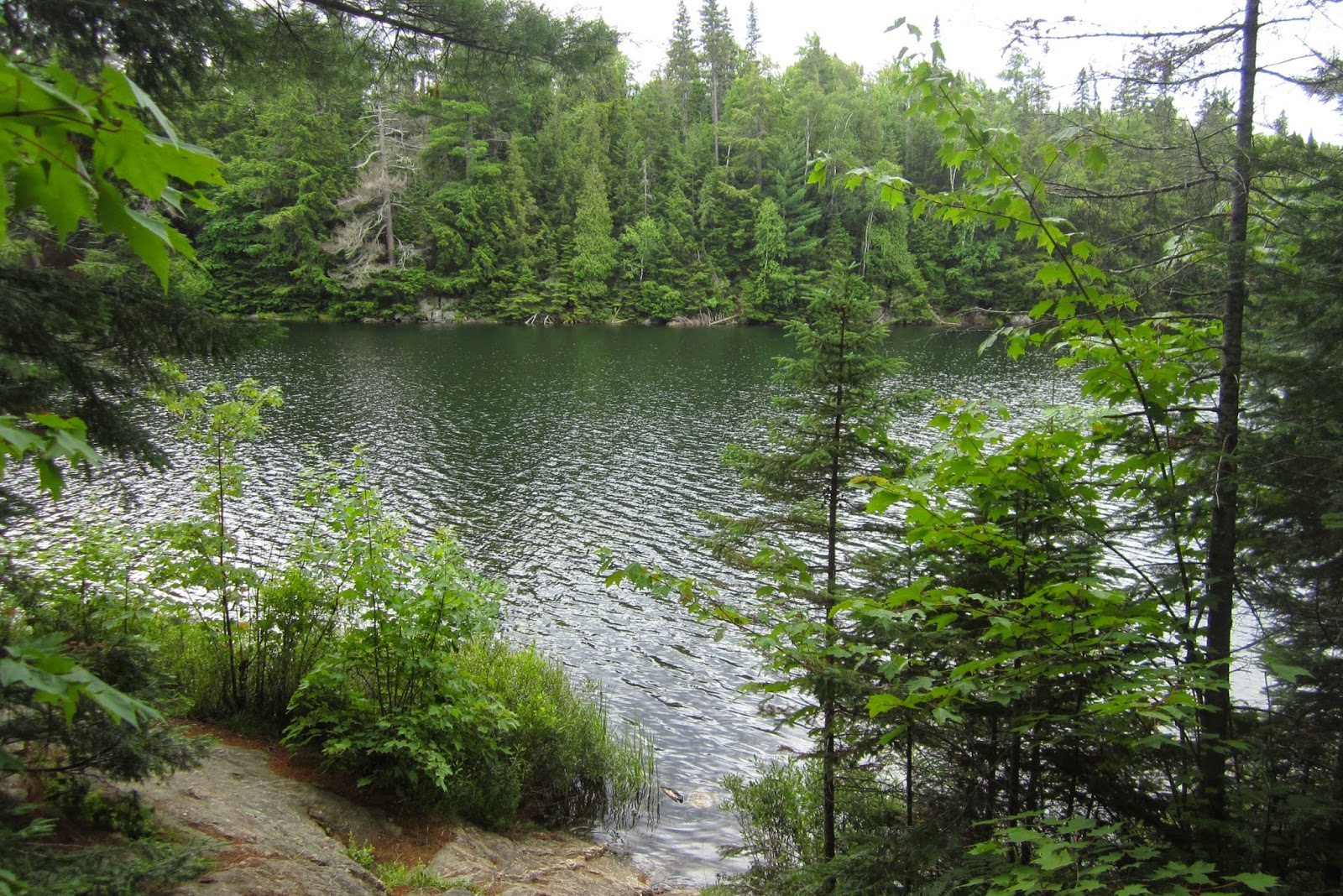 The pictures? The Bruce Trail and Algonquin Park - tamed wildernesses!!

Have a poetic day!!
Posted by Carol Tomany at 9:28 AM No comments:

I have to thank Lee Ann Dalton for this poem. I follow Lee Ann on FB. She writes the column "Made in Canada" in Vogue Knitting and has written about a number of us, myself included. I haven't been reading a lot of poetry lately, because I haven't come across any new poets that I am drawn to (to whom I am drawn). Fortunately, Mary Oliver has filled that void!! I love her poetry and I intend to read more of it. Here is the poem Lee Ann recommended, Wild Geese.


A few words and images to take you out of your despair and maybe out of this miserable winter. Or maybe not. I copied this poem and pasted it here over a month ago. Somehow it couldn't take me out of the despair I was feeling in the blinding cold of February. It speaks to me now, though, as I write and wait for the wild geese to come home. Honk, if you love Spring :)

The picture? Canada geese on the Jordan river near Niagara. I love "goin' down to Jordan," to set my soul free!!
Have an awesome day!!
Posted by Carol Tomany at 7:28 AM No comments:

I saw this word on FB. It's from the site Wordporn and it means - an overwhelming urge to run away. I didn't identify with it immediately. It wasn't really onomatopoe-ic enough - in other words, it didn't sound like what it meant. Escape words need to roll off the tongue. They need to run away and take you with them, head first!!

In the first place, "drape" is a lazy word and suggests just hanging out, with no sense of purpose other than to be idle and maybe puddle on the floor - or maybe not, as the case maybe. "Tomani," on the other hand, is a little freaky, for me anyway. Change the "i" to "y" and you have my last name, by marriage - Tomany. There is mischief afoot or there are Freudian slips. Yes, I could easily run away to some place warm and sunny -  I've been thinking about it a lot this February. 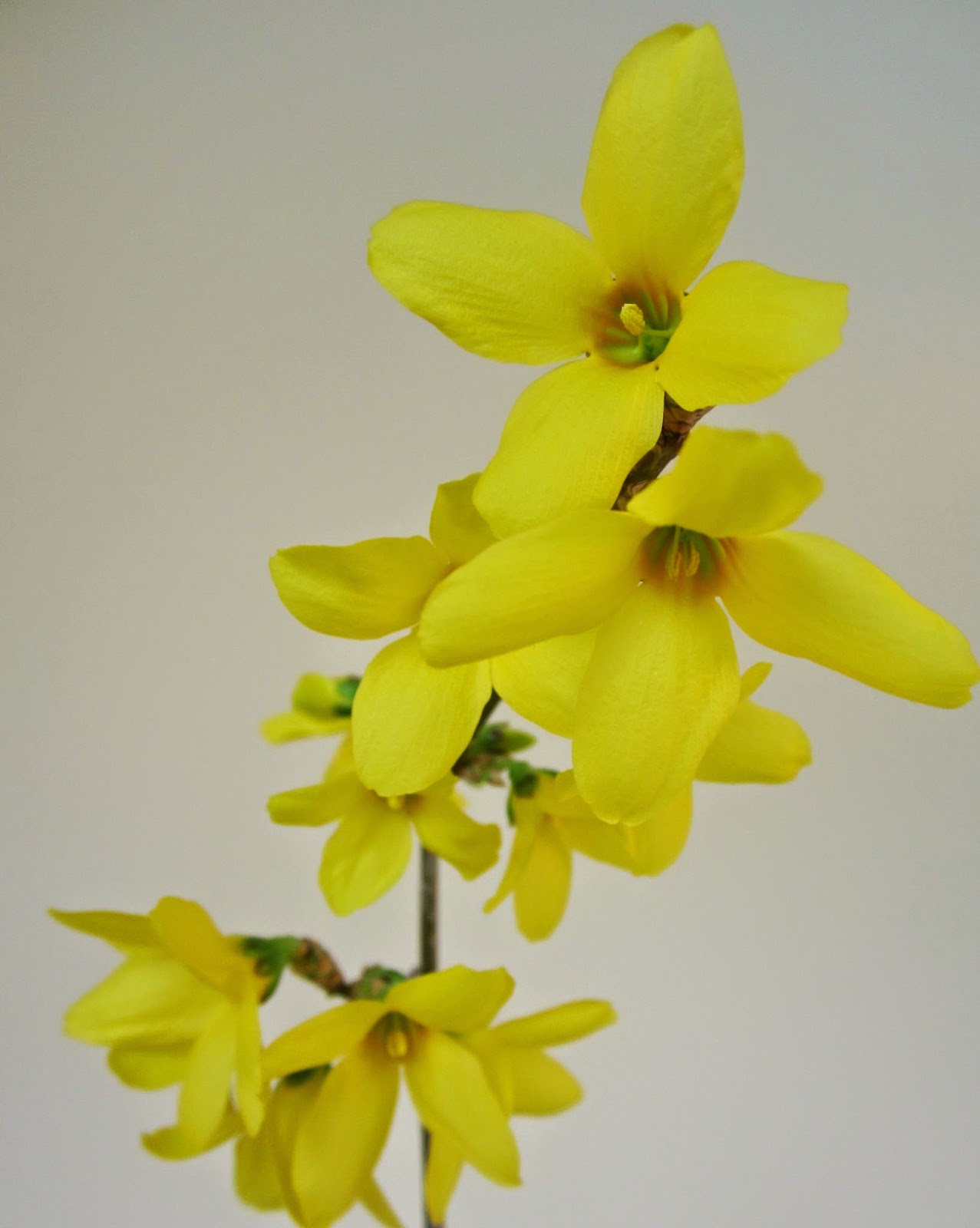 What stops me is, what would I do there?  Would I have a garden? Yes, I could write and walk. But I need something more. I'm working on it. There is the whole world of house sitting that I haven't even begun to explore. Then I could tend someone else's garden and maybe clean their house a little.

Did I mention that I have been reorganizing cupboards and I started to clean the fridge? Spring can't be far away. We need a word for - an overwhelming desire to clean out the cobwebs of winter in preparation for Spring. I wonder if "Corcoring" would work. It's from my maiden name, Corcoran. Ahhh an Irish Spring!!

Have a warm day!!
Posted by Carol Tomany at 8:18 AM No comments:

This post is a little out of sync, but then hasn't everything been lately!!

Extreme cold must dull the brain. The temperature has been plunging regularly to the -20s ºC from the mid - 10s ºC this February, making it the coldest February on record. Hence, I have had "brain-freeze." Things need to lighten up before I can see the levity in any situation.

It did warm up to snow yesterday, so we got another dollop of frozen white stuff. It makes for pretty pictures, but not for easy travelling, either by car or on foot.

In the category of "those who struggle shall be rewarded, eventually," I did manage a walk the other day and I was indeed rewarded!! I came across this mini library on some Good Samaritan's front lawn!! I have seen them on-line, but like so much of what one sees in the media, it's always somewhere else, never here!! 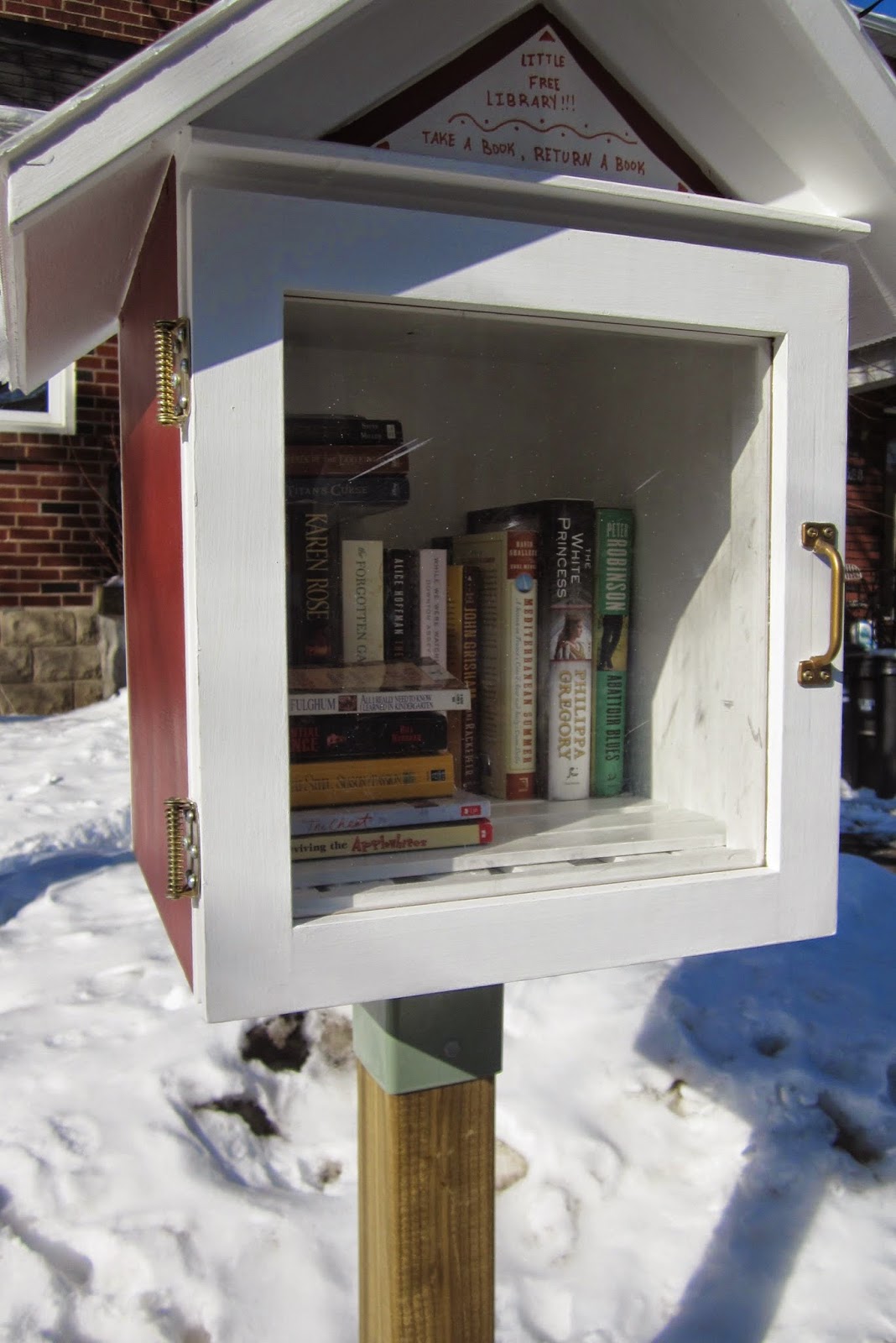 Well, here it is. For those in the neighbourhood, its on the north side of Soudan, a house or two east of Cleveland. The books were typical winter fare - a Danielle Steel or two, a Robert Ludlum, a John Le Carre´ and a book entitled "While We Were Watching Downton Abby." I was tempted by the last one. As one of the few people in the world who has never watched a soap opera, I wondered whether the book was the distillation of my philosophy of life, or at least the TV watching side of life.

I would have borrowed it, but then I didn't have a book to replace it with (with which to replace it.) When I pass there again I will take Hemingway's "The Sun Also Rises," which has been hanging around my landing for the last year or so. It needs a proper home :)

Posted by Carol Tomany at 7:21 AM No comments:

Say "No" to the Dress

To be kinder, maybe it's just the giddiness brought on by too long a struggle with a miserably cold winter that has turned thousands of us into colour zombies!! Those of us, who are not colour blind, obviously need COLOUR!!! We've had enough of winter's black and white and so we seize every opportunity to discuss, argue, even scream, COLOUR!!

I loved an article by Edward Keenan, in the Toronto Star, on all the hullabaloo this week over the colour of a dress. The article lists twenty four reasons for all this insanity. Here they are, with my comments in italics.

2. As blue and black. My husband sees grey cats as green. Who am I to judge? Then again, there are the pink elephants.
3. As a stunning revelation that people you thought you could trust are lying to you about what they see when they look at the dress, for an undetermined reason.
This is so true. You know who you are. Last week it was the bank - never trust anyone where money (or colour) is concerned.
4. As an interesting optical illusion.... as in seeing spots? or pink elephants?
5. As an example of how social media makes us obsess about trivial things, presumably at the expense of more important things. Enough said!!
6. As an amusing opportunity for relief from more depressing, stressful, and frightening news and debate...and February!!

7. As an example of how all colour perception is a trick of light. Pinhole cameras anyone?
8. As evidence that all perception is subjective. This begs the oxymoron, how can anything that is perceived be objective?
9. As an illustration of how people with different subjective impressions are unable to understand or even believe those who disagree with them....been there :)
10. As a proud inheritor of the nonsensical tradition of the Ikea Monkey, dancing baby, and piano-playing cat...and in pre-internet times - pet rocks.
11. As a vivid example of how our beliefs, formed instantaneously, remain immune to argument, evidence and reason.....Happens daily!!
12. As an example, in the cases of those who claim to have originally seen it one way but later looked again and saw it the other way, of the power of peer pressure to change how we look at things....Be afraid, be very afraid!!
13. As blue and gold, for the sake of contrarianism....you know who you are!
14. As black and white, because if everyone else is being absurd about it, why not go for the other option? There's one in every crowd.

15. As a microcosm of an Internet culture in which almost any innocuous topic will quickly descend into bitter argument. This is not just about the internet. It's also why I avoid extended family gatherings.
16. As an article of clothing. I can't remember the last time I've worn a dress :)
17. As a nefarious smokescreen cooked up by oppressive conspirators to preoccupy the masses. A religion of coloured costumes - yes, it works.
18. As a sales opportunity for Roman Originals, the company that made the dress. Not a bad ad campaign.
19. As proof that in an existentially opaque universe, we find significance in arbitrary things, elevating even inanimate artifacts to celebrity status in an attempt to find meaning. Have you read my post on sieves?
20. As the stupidest thing we all became obsessed with since the escaped llamas on Thursday afternoon. No comment. I saw the raccoon video a year or so ago. I don't need any more exposure to animal antics and I never watch cat videos - bah humbug!!
21. As a likely outdated punchline at next year’s Oscar’s. I never watch these either.

Have a colourful day!!
Posted by Carol Tomany at 7:06 AM No comments: