An Evening of Sliders Part 2

My eldest, who was away the evening we did Sliders Part 1, decided that he would like to try making some. He hadn't cooked much at home, while he was working in catering and complained regularly that he didn't have time for his Art. Now that he is supposed to be working at Art full-time, he's doing more cooking, go figure! Anyway we decided that since there was a small filet of salmon in the freezer to use up, he could do a medley of salmon, turkey and beef sliders Thursday night. Here is how the evening was orchestrated -

1. I took out the salmon and the hamburger from the freezer the night before to thaw in the fridge. I also ordered 18 slider buns from Cobs on Wednesday for Thursday pick up. I know, there would be five for dinner with three burger choices each, that would be 15 buns. Math was never a strong point :)

2. Thursday my son went out to buy minced turkey and some other ingredients. Fortunately everything he forgot to buy, we had in the fridge or freezer. Cranberries keep frozen for a long time, don't they?

3. After work, I arrived home and began cleaning up the chaos. In restaurants, chefs cook. They don't empty dishwashers or wash pots, pans, bowls, plates, cutlery etc. I had my work cut out for me, while he stirred the cranberry sauce, he'd made from scratch, the caramelized onions, checked the salmon baking in the oven and chopped the dill.

4. His sister left to get beer for herself and the other brother. Her excuse was that St Louis' serves beer with their burgers. What I lacked in math, she lacked in logic. I decided not to argue.

5. The other brother left to pick up a large bottle of Coke for the cook. Unfortunately he got Pepsi Max which is like a diet cola with sugar. OK, another one with some missing genes for logic!! 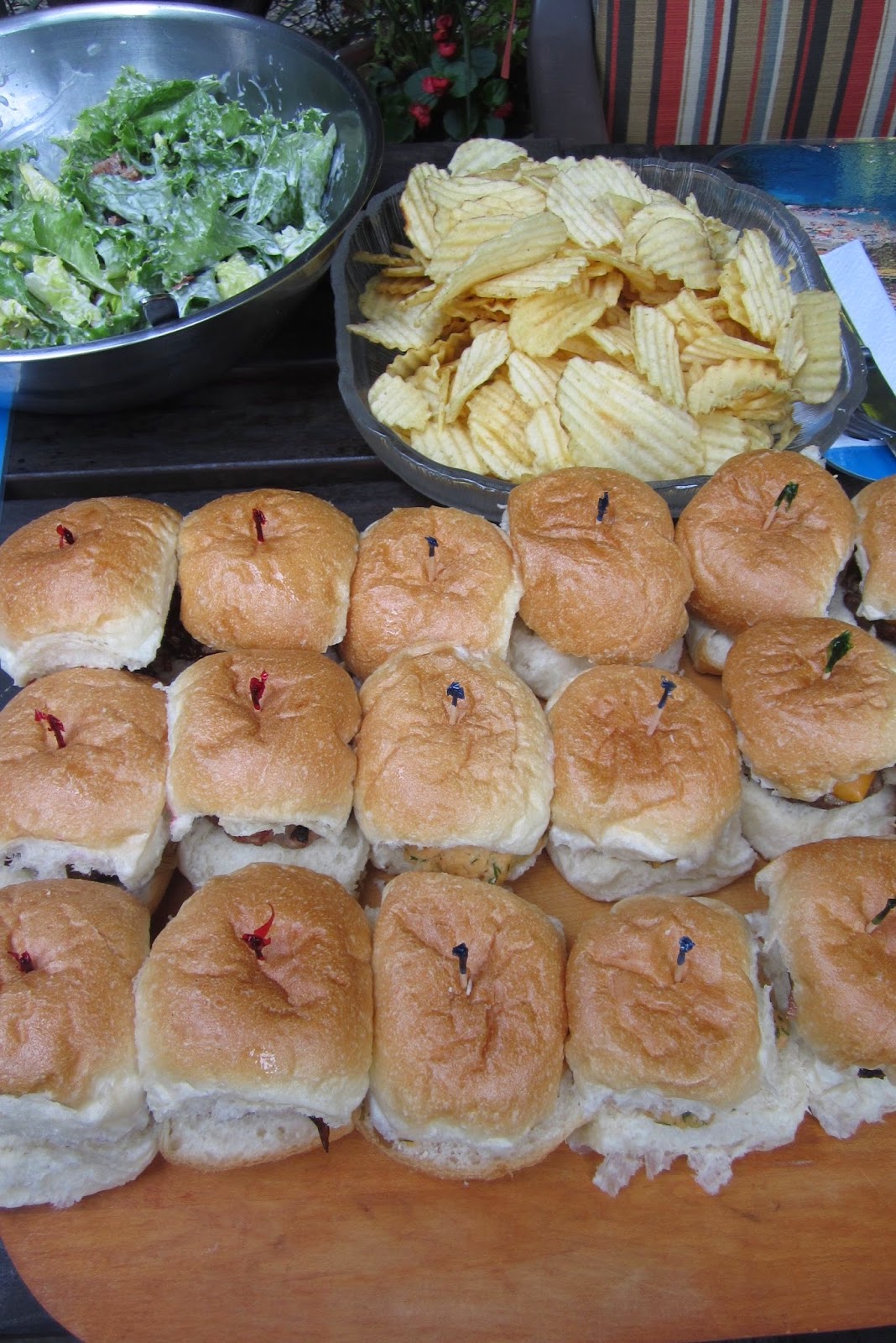 6. My husband disappeared upstairs to fold laundry - probably the only one with any sense at the moment.

7. While the chef moulded all the ingredients into tiny patties, which fit perfectly on the BBQ, I washed the Romaine, zapped the bacon in the micro wave and toasted one slice of bread for the Ceasar salad.

8. I left the cook to assemble the salad and watch the burgers, while I dashed out to pick up some "real" coke for him. Even I couldn't have had something like Pepsi Max after doing all the work he had done that day!!

7. In true culinary hubris, (can I say that with sliders?) the chef dressed all the burgers, as he thought fit and stuck each one with a colour coded toothpick - order from chaos!!

8. My husband appeared with a bag of potato chips to round out the meal and we all finally sat down to sliders of - salmon with mayo dill and capers, turkey with cranberry sauce and caramelized onions and last, but not least, a traditional beef slider with tomato, melted cheese and ketchup!! YUM

The picture? Coloured coded sliders all in a row. :)