Pomegranates and the seasons of life!!

I mentioned in another blog post that I was waiting for the return of Persephone!! I don't know why I say that I don't read Fiction or Fantasy, I love mythology!! One of my favourite myths is how the seasons came to be or the story of Demeter and Persephone.

This all happened a long time ago in Ancient Greece, when gods and goddesses roamed the earth, as well as the heavens, acting out the soap operas of their lives, while mere mortals stood by hoping for the best. One episode involved the goddess Demeter, sister of Zeus, and her daughter Persephone. Demeter was goddess of the earth, a realm she looked after very well. She and her daughter spent wonderful days roaming the world gathering flowers, visiting farmers and generally spreading good cheer among those who looked after her gifts.

One day, however, Persephone strayed a little too far from her mother. Once she was out of sight, cruel Hades, ruler of the underworld, broke through the earth on his fiery chariot, capturing Persephone and taking her back to his underworld kingdom. Demeter, when she realized that her daughter was missing, went into a deep despair. She refused to let anything grow. The earth withered and mankind prayed to Zeus for salvation!! Zeus, who knew everything, had to intervene. He told Hades to return Persephone to her mother. Eventually Hades agreed on one condition. Persephone could go home, if she had not eaten anything during her time in the underworld. Unfortunately, she had eaten 6 ( some say 7) pomegranate seeds. Alas, her fate was sealed. Demeter, in her grief, would then destroy the earth. Zeus bargained some more and Hades finally agreed that for every pomegranate seed Persephone had eaten she would remain one month with him. The rest of the time she could be with her mother. 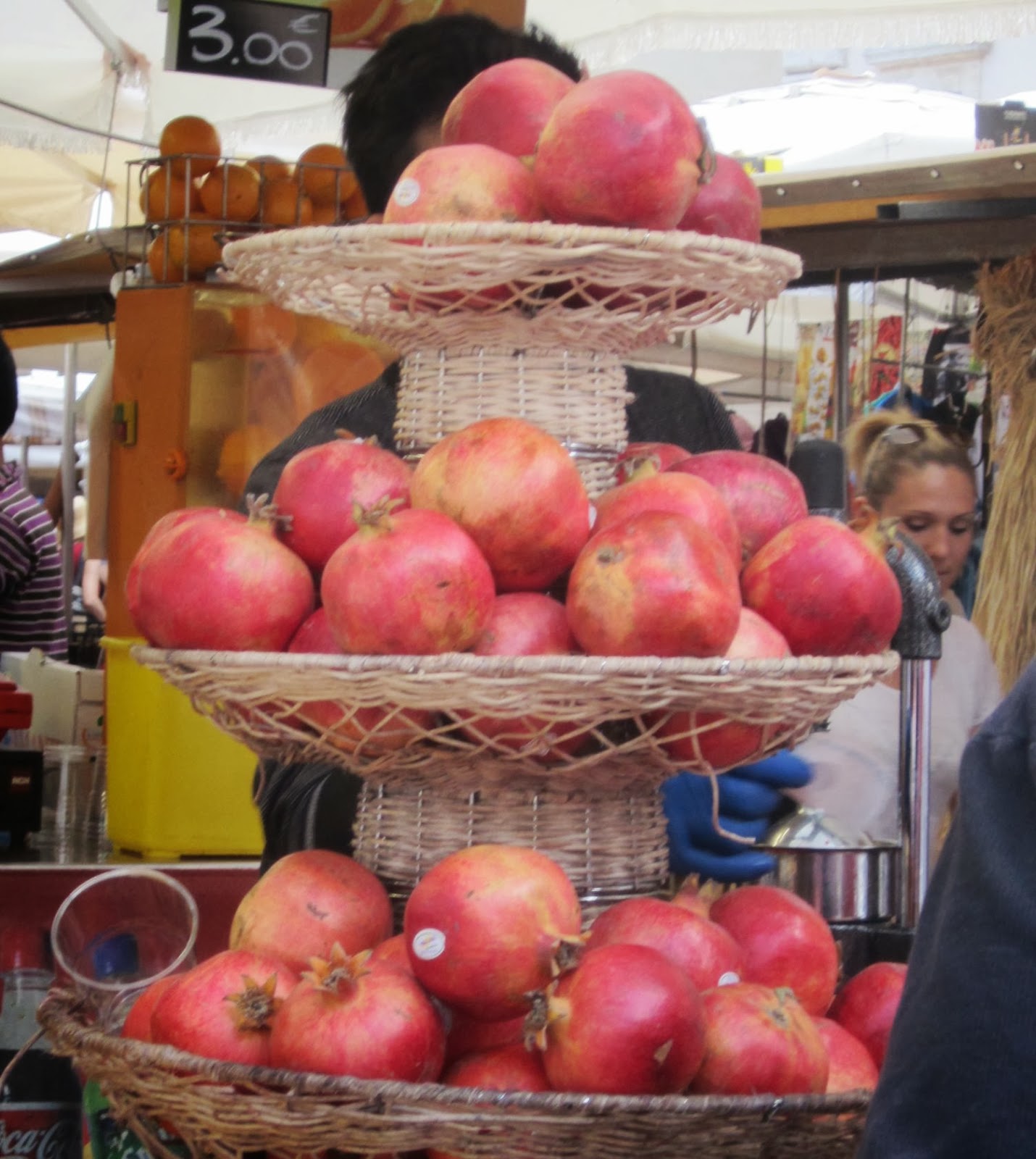 And so it is that we have Fall and Winter, when Persephone is in Hades and Demeter goes into mourning. When Persephone returns to her mother, Demeter is joyous and we have Spring and Summer.

Now, if it weren't for Hades or the ingestion of 6 pomegranate seeds, we might have had eternal Summer. Yes, I know that some parts of the world do have it, but they have their own stories and those of us in the northern hemisphere have to have some interesting stories to while away six months of cold and misery!!

Also I guess we have to be thankful, that Persephone didn't eat all 613 seeds (the numbers vary greatly depending on the source), because then we would be in deep trouble!!

The picture? Pomegranates in Rome for smoothies with a side of mythology :)
Posted by Carol Tomany at 8:01 AM