Last Saturday, my daughter was going out to dinner and then to a movie. As I'm always interested in a good restaurant, I asked her where she was going. Apparently, they were going to a place called "Bamburger." I immediately thought of Bambi!! I wasn't worried that they were serving venison, I just had this image of all these cute little animals on a bun - so sad. On Sunday, I asked her how the meal was. She said that the restaurant had closed - I'm not surprised!!

With all this ice and snow, I have been confined indoors far too long and clearly cabin fever has set in. My thoughts are a little deranged and I am starting to imagine "things." I wonder, for example, why my box of baking soda is called "Arm and Hammer." I know that bicarbonate of soda is used for cleaning and I use it a lot, however, I also use it in my cooking. I'm not sure that I want my muffins rock hard. The picture on the box of an arm holding a hammer, always reminds me of the hammer and sickle of Soviet Russia. All I can think of now are babushkas and woman scrubbing floors - how not to sell a product!!

The other day, a fellow blogger, Muriel Jacques, mentioned that her favourite word was "anodyne" - pronounced an/a/din. It means something that eases pain. I immediately thought of Anacin and wondered if there were a cure for being stuck in the house. Don't say, "go outside," because one foot on the ice encrusted driveway could lay me up for weeks and then I would have bedroom fever - best not to go there :) 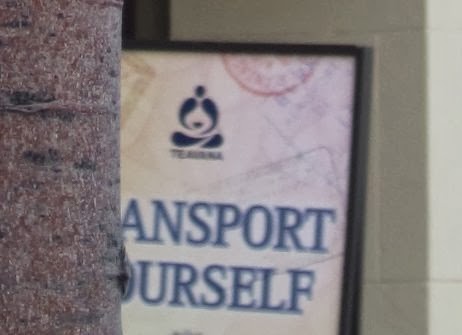 Another blogger, Roy Ackerman, in the same group, said that a word he remembers often is "meretricious." It means having no worth. An older usage also meant related to prostitution. Funny I always thought that it had a positive spin, because the first part of the word sounds like "merit." Now, I am really confusing things. I think that I have to put on the heavy artillery, brave the elements, get out there and face reality. It has to be a lot better than my imagination at the moment.

The picture? Something random, like my mind. It actually reads, "transport yourself." Really, I wish I could :)