For my last post for the year, I was going to do a collection of my favourites from 2013, but that would mean re-reading 364 posts. I also know that I would find errors to correct and syntax to improve, which could take days. Instead, I found a post from January 2013, that had a list (there's that word again) of my plans for the year. The post was titled, Live to 100 and given that my dad is now 99, I can at least hope :) The idea is that people make lists as a way of planning to achieve something, such as, losing weight or getting out of debt etc. The original site that started the idea, www.livingto100.com, suggested that you make a list of how you are going to live to be 100. Here is my original one from January 2013, with end of the year notations.

1. I will write this blog to record interesting "things" that have entered my radar. Writing about these blips, these signs of the existence of things real or imagined, gives me time to pause and enjoy them. It's not so much about having busy days, it's more about having days of meaning - quality not quantity.

Well I managed, with this last post, to write 365 blogs in the year. Not everyday and not all with pictures taken on the day, but it was a start and I am now going to work on improving my writing of it in 2014.

2. I will clean out the clutter, to free up my mind and my space to concentrate on what's important.

I have cleaned up a lot at home and a little at the office and I definitely feel lighter!!

3. I will walk more, for exercise, yes, but also for moments of interest. Walking is one of the slowest ways of moving from A to B. When you zip by in a car, you miss so much.

I have stepped up my walking, no pun intended. I bought a FitBit in December and I plan on tracking my walks to increase them, with a lot of help from my black plastic band.

4. I will try to connect more with people.  I often say that I am not strongly a people person. Don't get me wrong.  I love people.  I just don't always seek them out as energizers. I sometimes have to recharge my batteries by being alone and writing or knitting or walking.

5. Making 3 changes.  I was talking to a friend the other day and she is following a writer, who has suggested that you can improve your life through small changes. He recommends that you try to change just three things, at a time.  Presumably when the first 3 things are ingrained, you move onto another 3 things and so on. Well, my friend plans to cut out junk food, soda pop and wheat. I thought OK, I don't eat junk food, or drink pop, and I plan to keep my addiction to pasta for another year or two. 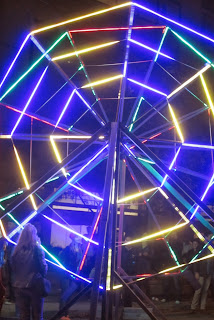 So, I have to come up with some other ideas. I do want to read more and I was thinking of getting an audio book system set up. I also plan on keeping a better filing system, once I have cleaned out the clutter. And finally I will step up my "Dale Carnegie" approach to life and its challenges - never criticize or say negative things - everything can be re-phrased with a positive spin!!

Dale Carnegie is working!!  I button my lips more than I have ever done and try to re-phrase things positively. I still fly off the handle every now and again and over-organized corporations will always get the bulk of my wrath, but I'm much better with my kids. At least I think so :)

I have made a spread sheet of the classics (books) and I am systematically working my way through the 80 (now 78) titles in the "must read column." OK it took me a whole year to get organized enough to read 2 books on a list of 80. But it's a start.

The picture? Hope things just keep rolling along for you in 2014.