Buried in the Cemetery....

...Well, yes, this is what one would expect, however, I don't think that anyone expected this. We were out for a walk, finally!! I was beginning to feel pretty "Cabin Fevered" because of the weather. The ice storm had made walking very treacherous and the extra three or four inches of fresh snow on top of it created a sort of slip and slog to the trudge. That is, you knew that you had to slog through the fresh snow, but you never knew when you were going to hit a patch of ice and - whoa - slide all over the place!! 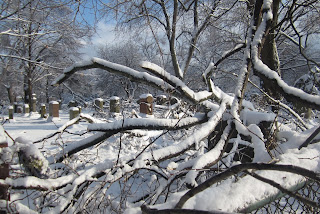 Fortunately the main streets were fairly clear, so we made it down to the cemetery, which is almost a mile walk from the house. However, we could not walk through the cemetery grounds. Security was there and turned us back. It was too dangerous, they said. Limbs were still apt to fall and although there were no power lines down, if the ice melted slightly in the sun, huge shafts of it could come down on your head and that, in itself, might end your walk a little prematurely. 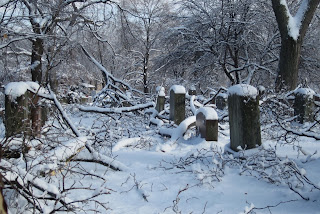 OK, we got the message. We turned back, but before I left, I took some pictures. Many headstones were buried under layers of fallen trees. I looked for those little ironies in life. Perhaps a last name of "Snow" covered in it, or "Frost" iced with it, or "Thatcher" laced with it. I'm sure I could have found a few, if we had been able to walk the half mile or so through the cemetery to Bayview Ave. 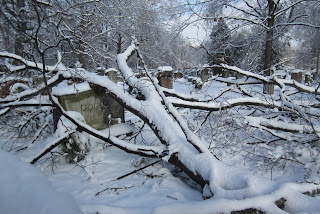 However, the only names I saw, in a quick scan of the few markers that I could see, were "Nurse," yes, some could use one and "Pogue." I had no idea that Pogue actually translated into an English word until I looked it up on line. Wikipedia had some very interesting information about the origins of the word as a retronym or backronym. Essentially it is a negative term, originally used by the military, to mean - non-combat staff. The link will give you more information than you every wanted to know about the word and others that are related.

I left the cemetery feeling a little sorry for the Pogues. In their position they really didn't have a chance to fight. Neither did a whole lot of other people who suffered because of the storm. Many are still without power and it has been 7 days now since the ice storm hit. I am not sure that there are weapons out there against these forces of nature. Maybe you just have to bury your head and hope for the best!!

Have a wonderful day!!
Posted by Carol Tomany at 8:45 AM